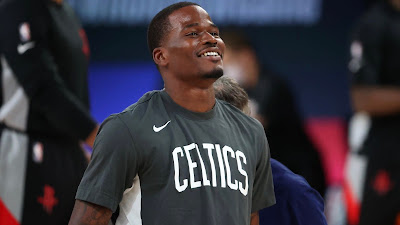 Celtics forward Javonte Green has left the NBA bubble and is expected to miss 2-3 weeks after undergoing a procedure on his right knee to repair a small meniscal tear, the team announced Tuesday.

Green returned to Boston and his successful knee procedure took place at New England Baptist Hospital this morning. The Celtics rookie is expected to rejoin the team at some point "within the week" and can resume basketball related activities in a couple of weeks after that.


Green will rejoin the team in Orlando within the week and is expected to return to basketball activities in 2-3 weeks.
— Boston Celtics (@celtics) August 25, 2020


When Green returns to Orlando, he will have to go through the NBA's quarantine protocols. The 26-year old played in Game 1 against the Philadelphia 76ers and the Celtics 128-101 blowout win in Game 2, but was unable to suit up the rest of the series due to his knee injury.

The Celtics rookie has played sparing minutes this season, averaging 3.4 points in 48 games. Green, who has shown great athleticism, put up a career-high 23 points in the Celtics final seeding game against the Wizards.

Green is the second Celtics player to leave the Disney World campus, after Brad Stevens said prior to the team's Game 4 series clinching win over the Sixers -- Gordon Hayward had left to rehab a sprained right ankle.

Boston opens up their best-of-7 second round matchup against the Raptors on Thursday night.