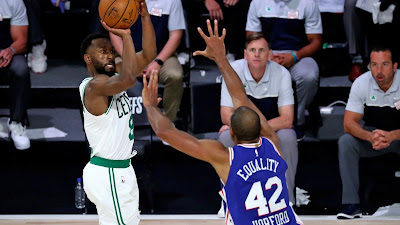 Kemba Walker finished with 10-of-20 shooting from the field for 24 points and a playoff career-high 8 rebounds, as Boston took a commanding 3-0 lead in this first round best-of-7 series.

"I've always felt like I'm a winner, and I want to play at the highest level," Walker said after hitting the game-clinching shot. "I'm able to do that now and it's really exciting."

Jaylen Brown scored 21 points and grabbed 7 rebounds, while Jayson Tatum struggled on 6-of-19 shooting to add 15 points. Marcus Smart, who started once again for the injured Gordon Hayward (ankle), netted 14 points to go along with 8 rebounds for the Celtics.

Joel Embiid notched his third straight double-double with 30 points, 13 rebounds, while Shake Milton and Josh Richardson each scored 17 points a piece. Tobias Harris chipped in 15 points and 15 rebounds for the Sixers, who shot only 29.5 percent overall from floor.

Tatum picked up his third foul at the end of the first quarter and sat out the entire second before the Celtics led 51-49 at the half.

The 76ers allowed eight straight unanswered points from Walker (8-0 run) midway through the third period, while Embiid committed his fourth foul and headed to the bench until the start of the final frame -- Philadelphia kept it close and eventually pulled ahead for the first time.

Daniel Theis (8 points, 5 rebounds) fouled out with 3:01 left to play and Boston leading 92-90, Embiid sank four consecutive free throws and the Sixers took a 94-92 advantage with 2:14 remaining. That would be the last time Philadelphia would score, as Walker hit a 20-footer dagger and Tatum iced it with a huge block on the opposite end with less than a minute on the clock.

Embiid was held to just eight points in the second half after a 22 point and 11 rebound stat line at intermission. Neither team shot particularly well from behind the 3-point arc -- 76ers went 9-of-39 and Boston shot 8-of-31.

The Celtics will look to complete a series-sweep when they meet the Sixers for Game 4 on Sunday afternoon. ABC will have the tip-off beginning at 1 pm EST.

Despite Boston shooting 41.4 percent from the floor and outscoring the 76ers in the paint 44-30, they were out-rebounded 69-56, including 20 offensive board by Philadelphia.