Celtics to face Raptors in second round, Kyle Lowry's status unceratin for Game 1 after sprained ankle 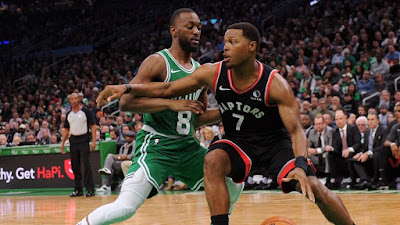 The Celtics will officially face the NBA champion Toronto Raptors in the Eastern Conference semifinals.

This will be the first time that both teams have met in the playoffs, as Game 1 is scheduled for Thursday night.


While the Celtics swept the Philadelphia 76ers and the Raptors completed a four-game sweep of the Brooklyn Nets in their respective series on Sunday, both will enter the second round with injuries to one of their starters. Boston will be without Gordon Hayward (ankle) for at least the next three weeks or so and Toronto announced that All-Star guard Kyle Lowry has a sprained left ankle that he suffered in the first quarter of their Game 4 win.


Raptors star Kyle Lowry has been diagnosed with a left ankle sprain and status will be updated later.
— Shams Charania (@ShamsCharania) August 24, 2020


Lowry's status for Game 1 remains uncertain following an MRI and will be updated "as appropriate," per the Raptors. Nick Nurse, who won NBA Coach of the Year honors over the weekend, spoke about his starting point guard's injury.


"You certainly want your best players out there -- without question," Nurse said following the Nets 150-122 win on Sunday. "But sometimes you don't have much choice. That's something we've become accustomed to in this league. You have to go out there with who is healthy and who is available. You have to think there's a good chance you can figure out a way to win. That's what we'll do either way."

The Celtics won their regular season series against the Raptors 3-1, including an impressive 122-100 victory in the 'bubble' just over three weeks ago. Jaylen Brown, who led seven Boston players that scored in double-figures with 20 points, knows the tall task that lies ahead for the C's in their round two matchup with Toronto.


"We've got to play 48 minutes," Brown said. "How we start is how we gotta finish. Getting ready for the next game, we can't let things carry over. We gotta be ready to hit first and play for a full 48 minutes against Toronto. They're a good team.

"I think we're clicking on all cylinders with this unit that we have here. Last year we had a lot of talent and I think this year we're better as a team. Going into the next series, we have to be ready to fight. Last year we swept as well in the first round and, in the second round, I think we lost in 5. We have it in the back of our heads, the guys that have been here, we gotta continue to come out and play. Hopefully, things turn out a little bit different for us. I think we have a better team and I think we’ll prove it here in the second round."

The Raptors are 11-1 in Orlando, including the playoffs and the Celtics have a 9-3 record at Disney World so far in the restart.