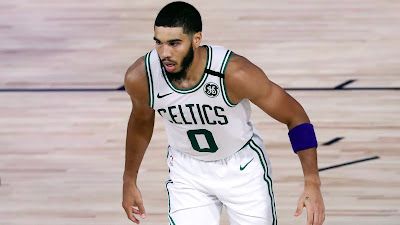 On Sunday, what would have been the late Kobe Bryant's 42nd birthday, Jayson Tatum honored his mentor and favorite basketball player.

Tatum recorded a double-double of 28 points (10-18 shooting) and 15 rebounds, while wearing a purple armband in the Celtics' 110-106 win and sweep of the Philadelphia 76ers.

Players around the NBA and athletes from other sports leagues paid tribute to the Lakers icon, but for Tatum, who called Bryant "my hero and the reason I play basketball" just days following his tragic death in January, the day meant a little more to the Celtics All-Star.

Tatum spoke about how he paid homage to his idol following another great performance in Game 4.


"I just wanted to acknowledge him. I know a lot of other players did today," Tatum said. "Everybody knows how much he meant to me. Just the extra chip, extra motivation I carry out when I go out there and play. Just know that he is always watching. And I just try to make him proud."

There's no doubt Bryant, who invited Tatum to workout in Los Angeles two summers ago, would be more than proud to see how far the young star has come and at only 22-years old. As Boston prepares to face the reigning champions in the second round, Tatum's 26.7 points and 8 rebounds average against the Sixers will be key in the next series.

Game 1 of the Eastern Conference semifinals between the Celtics and the Raptors is scheduled to tip-off Thursday night.