Jaylen Brown (lower back) will sit out vs Heat 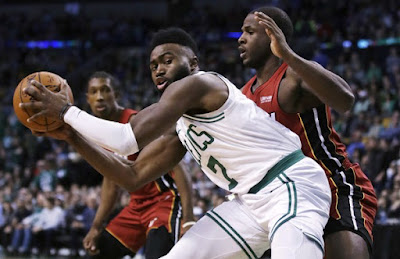 As the Celtics prepare to host the Heat at TD Garden one final time this season and Dwayne Wade for the last time ever, there are playoff implications for all parties involved.

With five games remaining, Boston (45-32) holds the tiebreaker against the Pacers as the fourth seed, while the Heat (38-38) have a half-game lead over the Magic for the eighth seed.

The Celtics will look to bounce back from their 110-96 loss in Brooklyn over the weekend, but without Jaylen Brown who will sit out against Miami tonight with lower back spasms. The swingman and Boston's most consistent scorer off the bench is missing his first game since December 12th, in a win over the Washington Wizards.


Al Horford, who sat out against the Nets with soreness in his left knee and Kyrie Irving due to lower back soreness, will both play against the Heat.

It should be a good one in Wade's last visit to Boston as an active player, which will tip-off at 7:30 ET.