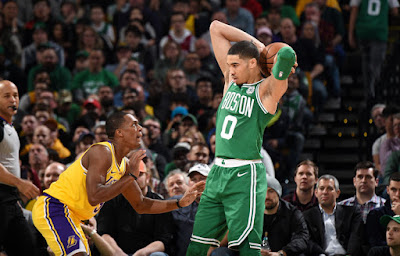 For Celtics forward Jayson Tatum, the NBA trade deadline was a stressful day.

Unsure if whether the Celtics were going to trade him or not, Tatum waited patiently until the deadline came and went before he was able to relax knowing he wasn't going to be leaving Boston anytime soon. It was something Tatum admits, he wasn't used to.


"It's new for me, especially when you hear your name and all the rumors," Tatum explained. "But I just focus on what I can control, go out there and play the game."

That's precisely what Tatum did Thursday night, and he turned in a solid performance. He was one of six Celtics players to score in double figures; Tatum netted 22 points on 9-of-14 from the floor. In a game where the Celtics blew an 18-point lead, the Lakers managed to erase a six-point deficit in the final 1:30.

LeBron James had a triple-double (28 points, 12 assists, 10 rebounds), him and Kyle Kuzma (25 points) combined for 10-of-18 from deep. Meanwhile, the Celtics' second unit combined for a whopping 61 points.

Still, not even Kyrie Irving's go-ahead layup at the end of Boston's final possession nor Al Horford's defensive stop on Brandon Ingram at the rim on the opposite end of the floor was enough to hold off the Lakers for good. Once the ball ended up in former Celtics point guard Rajon Rondo's hands following Horford's defensive play, he had plenty of time a mid-range jump shot that found the bottom as time expired in a 129-128 Lakers win.

It was a disappointing loss for a team that played so well despite its lapses on defense, especially in defending at the perimeter. In an offensive showdown, the Celtics certainly held their own from the starting unit to the ninth man of Brad Stevens' rotation, however, the Celtics head coach knows his team did itself in by not defending the 3-point arc and the end result was a fitting one.


"I thought the basketball gods rewarded the right team," Stevens said. "I hate to say that but we had a chance to wrap that game up with a rebound but that was kind of the whole night and in the first half they weren't making or converting on all of those, and they got a ton of them; the offensive rebounds. They had to make the big shots late to beat us.

"Those two threes in the deep corner opposite our bench were big-time shots and really hard shots, and then Kuzma was too open on his and then Rondo was in the right place at the right time."

It was almost as if the relief of knowing that the Celtics' active roster was staying intact from now until the end of Boston's upcoming playoff run, got the best of players as some of them turned in their best performances of season. Daniel Theis finished with 20 points, 6 rebounds and Terry Rozier (19 points, 6 assists) had his best game of the season off the bench.

Although it wasn't the result the Celtics wanted -- there's certainly plenty left to be desired from the defensive end that could have changed the outcome of Thursday's game -- the team's chemistry was at its best, as if players are finally coming to grips with their respective roles and are putting forth the effort to thrive in them.


"Everyone in here wants to be here," Tatum said. "We enjoy being around each other, playing with each other. Hopefully, we just stay healthy and give ourselves a shot.

"I'm glad to still be on the team. I know everyone else was probably watching, so I'm glad it's over with."