Celtics 113, Knicks 99: Kyrie Irving puts on a show at MSG despite distractions 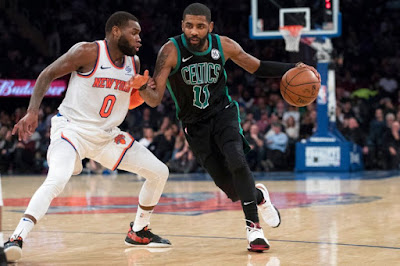 Kyrie Irving never seems to disappoints when all eyes are on him, such was the case under the bright lights of Madison Square Garden during a nationally televised Celtics 113-99 win over the New York Knicks on Friday night.

The Celtics lone All-Star this season, finished with a game-high 23 points and 10 rebounds, for his 12th double-double of the year, to go along with 6 assists. Despite the media circus of questions surrounding Irving's future before the game, Boston took care of business against the league's worst team.


"He's a guy that's very polarizing in the NBA and the world so everything he says, even if it's not really that serious, it's going to be taken out of proportion," Marcus Morris said afterwards. "But he still comes in, he's a professional. We all love him, we all want him here."

Marcus Morris, who finally got out of his shooting slump, went 7-of-14 from the field, including hitting four 3's for 18 points on the night. Al Horford (9 rebounds, 4 assists) and Gordon Hayward each chipped in 14 points a piece, while Jayson Tatum added 13 points, all in the first-half for the Celtics, who are now 33-19 and fourth place in the Eastern Conference standings.

The Knicks were just 24-hours removed from their blockbuster-trade of Kristaps Porzingis, Tim Hardaway Jr., Courtney Lee and Trey Burke to the Dallas Mavericks for Dennis Smith Jr., DeAndre Jordan and Wesley Matthews in return (who were not active to play vs Boston), plus two future first-round picks.

Damyean Dotson lead New York with 22 points and 6 rebounds, while rookie Kevin Knox scored 21 and grabbed 5 rebounds for the Knicks, who have loss 12 straight and are 10-41 on the season.

The Celtics were aggressive down low, scoring 54 in the paint for the game and led by as many 21 points in the final frame after the Knicks made it interesting and only trailed 80-73 to end the third quarter.

Boston, winners of their last eight of nine games, will fly home on Super Bowl Sunday to host the Oklahoma City Thunder in an afternoon matinee at the TD Garden.

Celtics shot 46 percent from the field and handed out 25 assists on 46 made baskets, while forcing 18 Knicks' turnovers