Danny Ainge: 'Kyrie has a lot of amazing leadership characteristics' 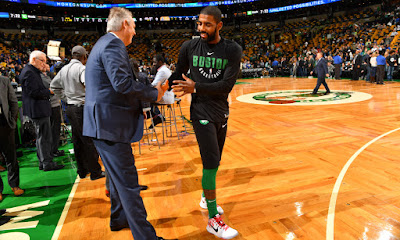 The Celtics are currently in the middle of a season-high four-game skid, while sitting with the Eastern Conference's fifth best record at 37-25. On Thursday Danny Ainge spoke with WEEI's Dale & Keefe about the state of the team and of course Kyrie Irving.

After weeks of Irving's leadership coming into question and if he already has one foot out the door due to various quotes in the media, the Celtics president of basketball operations talked about his All-Star point guard and the misconception that there may be some sort of disconnect between him and coach Brad Stevens.

Though considered as the Celtics' best player, Ainge doesn't believe that Irving is necessarily the team's only leader.


"I don’t think that’s the case. I think your best player is a leader, but most teams have many more than one leader," Ainge said. "As a matter of fact I think most players are leaders. They’re either leading somebody astray or they’re leading you down a path of good."

When asked if he considered Irving to be a good team leader, Ainge didn't respond with a simple 'yes' or 'no' answer.


"Kyrie has a lot of amazing leadership characteristics," Ainge said. "I don’t really know the perfect leader, but I think that that’s why I say it takes more than one. I think that Kyrie has an impact on the games, that’s leadership, impacting games the way that he does, taking games over, being mentally tough to make shots in the face of adversity is a form of leadership. Being able to influence people with his work ethic and his passion for the game."

Following the Celtics' blowout loss to the Raptors on Tuesday night in Toronto, Ainge downplayed being seen in the locker room having a conversation with Irving that might have been about something other than basketball.


"Kyrie is his own man, he’s gonna say what he wants, or not say what he doesn’t want," Ainge said. "I don’t ever doubt him with what to or what not to say, but our talk was strictly about basketball."

Ainge is also confident in Brad Stevens' ability to lead this team to success, despite Boston's inconsistencies this season. Ainge was asked if his coach was on any list of concerns regarding the Celtics at the moment.

This is not the first time an Ainge roster has been counted out after high expectations. Such was the case for the 2010 Celtics that finished 27-27 in the second half of the season, they entered the playoffs as the fourth seed and reached Game 7 of the NBA Finals.

This time around, Ainge is well aware that the season hasn't gone as expected, though he remains hopeful that it can still end on a positive note.

Listen to Ainge's full interview below: