Kyrie Irving not happy with the media, says 'It's been a trying year...' 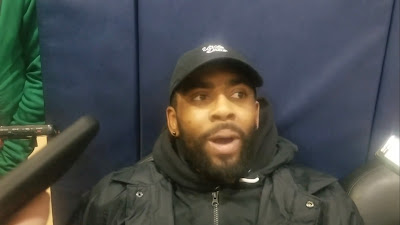 Kyrie Irving continues to defend himself against the media and it was no different following All-Star Weekend when a video of a him and Kevin Durant went viral.

The video shows the two friends having a conversation in a hallway over the weekend in Charlotte, which have many alluding to Irving and Durant discussing about potentially teaming up in New York to sign with the Knicks in July when they both can become free agents.

Following practice on Wednesday, Irving, who was fresh off a win in Sunday's All-Star Game, was asked about the video that has taken on a life of it's own.


"I disconnect,” Irving said. "Anybody’s stories, social media … I just don’t care for it. It ruins locker rooms. It ruins confidence in people, a fictitious way of feeling validated in the world. So, It really doesn’t matter to me."

Irving seemed to get more agitated when asked if he wanted to explain or clarify what the topic of conversation actually was, that has the media locally and nationally speculating about his pending free agency.


"Is the internet real for you in your life?" Irving asked one reporter. "It's my life, right? It’s two people talking, having a conversation. If it's the real world, would it be anybody else’s business? It's a video of someone assuming what we're talking about, right? Making an opinion about it. So why would I care? Why does that have an impact on my life? Why are you asking me those type of questions? About cooling it off? For what? I don't get it." [NBC Sports Boston]

Irving added, "What I do with my life is my business. It's none of yours, none of anybody's business. So it's a video of me and one of my best friends talking. And then it turns out to be a dissection of free agency meeting? You get that? Do you get that? And I'm asked questions about it? That's what disconnects me from all this. I have no connection to all that. Over a video? Every wants to hear athletes talk about bullshit like this. A video though? To pour water on it? It makes no sense." [NBC Sports Boston]


The battle between Irving and the media began earlier in the day, when ESPN's The Jump ran an interview with the Celtics star and Rachel Nichols from over the All-Star break. Irving addressed why he apologized to his former Cavalier teammate LeBron James over a month ago.


"Well, I think that, you know, it takes a very, very strong individual to replay a lot of the experiences that you've had," Irving told Nichols. "A lot of anger that you've had built up, where you didn't address the situation and you allowed it to fester. And then it was just combustion.

"It came out and it just ... you realize, like, 'Hey, man, I didn't have to deal with that the same way I dealt with that. I didn't have to go about it that same way.' Now, mind you, I have no regrets in terms of any decision I made, going about my individual journey and what I want and foresee for my career.

As the Celtics sit with the fourth best record in the East at 37-21, it hasn't been the easiest season for the roster that were considered the most talented in the conference, despite Irving having arguably his best year as a pro.


"It's been a trying year for us," Irving told Nichols. "We basically have a bunch of young men in our locker room who feel like they're capable of doing a lot more than they're doing. And that's OK, but there's a maturing that you have to have. There's a professionalism that you have to showcase every single day, and that's what the great ones do.

"I initially didn't play the minutes I wanted to play. I'm 26 years old, heading into my prime, like, why do I have to wait for anybody? [Terry Rozier] played in the playoffs. He did extremely well. Coming back, that's a natural competition that me and him have.

"It is what it is. No one wants to say it, but I will. You know, [Jaylen Brown, Jayson Tatum], all these guys, it's part of their growth. When you have winning in mind, you've gotta understand that. You gotta do what it takes, but you gotta understand your teammates." [ESPN]

While Irving continues to fight the media, the Celtics will begin their last stretch of the regular season against the Eastern Conference leading Milwaukee Bucks, as they look to make another deep postseason run that could possibly lead to an NBA Finals berth.