Kevin Garnett talks about what it meant to be a Celtic 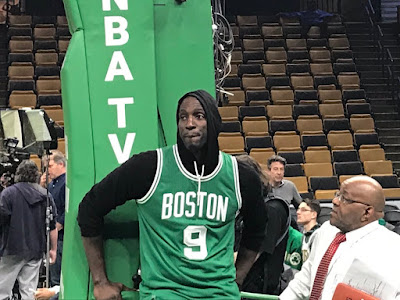 Kevin Garnett was back at the TD Garden Thursday night for the first time since the retirement ceremony of his former teammate Paul Pierce and the No. 34 into the rafters.

The future Hall-of-Fame power forward made his way through Boston, which included a stop at the new Red Auerbach Center where the Celtics now practice. Garnett took a tour of the New Balance facility and reminisced about what it meant to wear the green and white for six years.


"There was walls, with a bunch of banners and achievements to remind you of tradition," Garnett said. "To remind you the responsibility of putting this jersey on. And I always felt that. Always inspired coming into practice."


Garnett, a member of the 2008 Celtics roster that ended a 22-year championship drought for the franchise's 17th banner, spent some time with Danny Ainge and even Jason Tatum.


The former defensive player of the year couldn't roll into town without catching his former Celtics host the rival Los Angeles Lakers. Garnett not only was seen roaming around the TD Garden prior to tip-off, but he was also sporting a vintage Rajon Rondo Celtics jersey, in support of one of his good friends, who now plays for the purple and gold theses days.


Rondo makes his return to the Garden, where he called home for eight years, but this time wearing the enemy's colors.


"It’s a little strange," Rondo said Thursday morning before facing his former team as a Laker at TD Garden. "But I’ve been back in other uniforms as well. It’s still always home."

Both friends will more than likely be greeted with a warm applause by the Garden faithful, especially Garnett when he makes his way onto the jumbo-tron at some point during the nationally televised broadcast of the Celtics and Lakers, while Rondo will also be acknowledged by the home crowd when he gets introduced as well.

This is the first meeting between both teams since LeBron James signed in Los Angeles as a free agent. There will also be some New England Patriots in attendance, who are fresh off their Super Bowl win over the Los Angeles Rams, which should make for an interesting night at the TD Garden.