Anthony Davis' father doesn't want son to play for the Celtics, says they have 'no loyalty’ 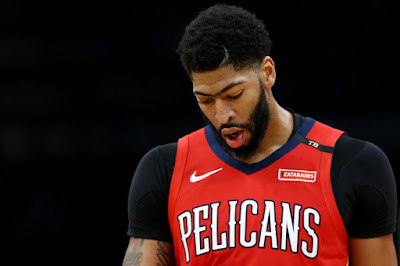 Anthony Davis' father doesn't like the idea of his All-Star son playing for the Celtics.

ESPN's Ramona Shelburne broke the story via a text message sent by Anthony Davis Sr., who didn't agree with Boston trading Isaiah Thomas back in 2017 and wouldn't want to see his son donning green-and-white anytime soon.


"I would never want my son to play for Boston after what they done to Isaiah Thomas, Davis Sr. said. "No loyalty. Guy gives his heart and soul and they traded him.

"This is just my opinion, not Anthony's. I've just seen things over the years with Boston and there's no loyalty." [ESPN]

Thomas averaged 28.9 points per game in an All-Star season for the Celtics during the 2016-17 campaign. Boston finished 53-29 and made it to the Eastern Conference Finals, but lost in five games to the Cleveland Cavaliers before Thomas was traded for Kyrie Irving during the offseason.

The story of Davis' text broke during halftime of the Celtics 113-99 win over the Knicks Friday, the same day that Kyrie Irving chose not to double down on the commitment he made to Boston prior to the start of the season, stating he would re-sign to stay with the Celtics this summer, followed by a report from The Athletic's Shams Charania on Daivs' list of teams.

Charania and others reported, the Celtics aren't considered a long-term destination for Davis, who still has one year left on his current deal before he will become an unrestricted free agent in the summer of 2020.

Davis requested a trade from the Pelicans earlier this week, though he hasn't specified a preferred destination, Charania reports he's open to play for the Los Angeles Lakers and New York Knicks.

The Pelicans All-Star was also fined $50,000 by the NBA after Davis' agent Rich Paul told ESPN's Adrian Wojnarowski on Monday that his client "wants to be traded to a team that allows him a chance to win consistently and compete for a championship."

According to the league's collective bargaining agreement, players or their agents are prohibited from publicly making trade requests.

It's been well documented that Danny Ainge has been interested in Davis for some time now and though they have no intention to make a move for the Pelicans' big-man before next week's trade deadline, the Celtics remain the team with the most young talent and assets that they can package together to offer New Orleans.

Davis has been sidelined since January 18 with a left index finger fracture, but could return as soon as next week.