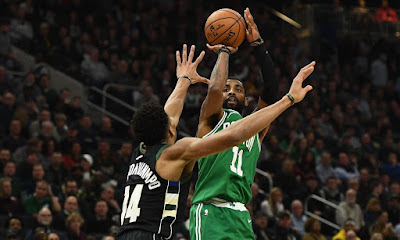 In midst of the media drama surrounding Kyrie Irving and a viral video that is still lingering from All-Star weekend, the Celtics went into the Fiserv Forum looking to win their season series against the Bucks only to come up short, in a 98-97 loss on the road.

Irving, who sat out of the Celtics lineup the last two games with a knee sprain, finished with 22 points on 9-of-27 shooting and 5 assists, missed the potential game winner with 3.5 seconds left when he drove the lane from the top of the key and failed to convert a left handed layup as time expired.


"Kyrie with the ball. That's what we wanted," said Al Horford, who notched a double-double of 21 points and 17 rebounds. "Get the ball in Kyrie's hands. Let him create. I felt like we put ourselves in a good position there."

Despite not having a great shooting night, Irving scored 10 of 22 points in the fourth quarter, while Jayson Tatum scored 17 to go along with his 10 rebounds. Jaylen Brown chipped in 15 and 5 off the bench for the Celtics, as they're now 37-22 on the season for the fifth best record in the East.

Giannis Antetokounmpo ended the night scoring 12 of his 30 points in the final frame, while grabbing 13 rebounds and dishing out 6 assists. Khris Middleton (13 rebounds) and Malcolm Brogdon both finished with 15 points a piece for the Bucks, who won their season series (2-1) over Boston for the first time since the 2014-15 season.

Horford hit a 3-pointer to to tie the game 95-95 with 54.7 seconds remaining, before Middleton nailed a go-ahead 3 on the very next possession. Irving hit a tough layup after fumbling the ball, to get the Celtics within one.

On the second-to-last-play, Marcus Smart forced a jump ball with Antetokounmpo. Antetokounmpo tipped the ball to Brook Lopez (10 points, 8 rebounds) who then deflected it towards the hoop with 0.2 seconds left on the shot clock, but missed it as the buzzer sounded.

Boston ran a play for Irving out of a timeout, as they had one last opportunity to win the game.


"I felt good about our last action," coach Brad Stevens said after the game. "It looked like we might have a layup opportunity there. Then you’ve got Kyrie coming up to the top and you feel good about that all the time."

Irving used Sunday's All-Star Game as part of rehab for his right knee and in preparation for the Celtics final stretch of the regular season.

Boston, now 37-22, will head to Chicago to take on the Bulls Saturday night, as their mini three-game road trip continues.

The Celtics shot only 38.2 percent from the field and went 5-of-6 from the free throw line, while forcing 16 Milwaukee turnovers. The Bucks out-rebounded Boston 64-55 and won the points in the paint battle 40-38.