Celtics have no immediate plans to fill open roster spot 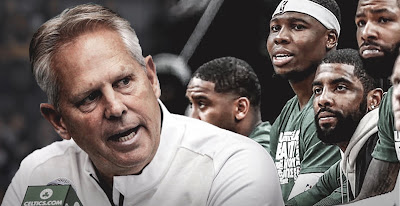 The Celtics still have an open roster spot after moving Jabari Bird to the Atlanta Hawks at the NBA trade deadline, but it seems like Danny Ainge is in no rush to fill that 15th and final spot.

It's been two weeks since the league's trade deadline and with recent injuries to big man Aron Baynes (foot) and rookie Robert Williams (groin), the thought was for the Celtics to hit the buyout market for potential candidates to fill the one remaining roster spot.

However, it seems like any top free agent that Ainge has had any communication with recently are not enticed by any role the Celtics can currently offer them.


"I talked with some players that were available," Ainge said, "but a lot of guys that are available are looking for commitments to play and start and X amount of minutes, and we don’t have that. We don’t have that available." [Boston Herald]

For the moment, Ainge has no immediate plans to fill the open roster spot and believes the Celtics roster, barring any new injuries, are for the most part heathy and have depth.


"We’re just waiting,” Ainge said. "We don’t really have a hole in our roster. Hopefully, knock on wood, nothing happens, but going into the playoffs we may need to fill a specific role or spot, but right now we don’t. We have a lot of guys, and we’re starting to get healthy. I mean, we’re just a week or two away from being totally healthy." [Boston Herald]

Aron Baynes is expected to return within the next couple of weeks from a left foot contusion and the Celtics will keep an eye on March 1, which is when free agents have to be waived by in order to sign onto a playoff roster.