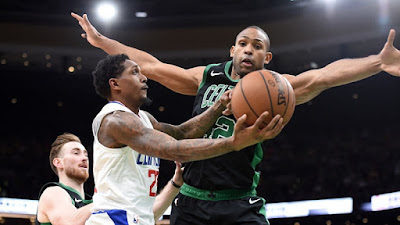 It was the tale of two halves, as the Celtics were booed off the TD Garden floor after suffering their worst defeat of the year and they may have now reached the lowest point of the season.

After blowing an 18-point lead against the Lakers Thursday night, the Celtics turned in the worst loss of the year against the Clippers Saturday -- where Los Angeles erased a 28-point deficit in a 123-112 win over the Celtics in Boston. As the Clippers began chipping away in the second half, it didn't take long for Celtics fans to turn on their team.

Scattered boos around the arena could be heard when the Clippers cut the Celtics' lead to six in the third quarter -- where Los Angeles outscored Boston 28-12 and when the final buzzer sounded, the boos came pouring down even louder while the Celtics players made their way towards the locker room.


"If (this is who we are) we won't last long," Brad Stevens said. "I've got to go back and look at, first and foremost, what I can do different to help. Our play out of the half at times this year has been really slow. That was again today but I think that started with our defense in the second quarter and you could kind of feel it going the other direction. Then we just got pounded again in the fourth."

The Clippers ended the game on an 83-44 run. However, much like Stevens has done all season long when the Celtics come up short, he put the blame on himself following Saturday's loss, explaining there's a solution to his team's recent struggles that he needs to figure out.


"Every year your trends change as the year goes on -- both good and bad -- but it is disappointing to have 20-point leads in consecutive games and lose, that's for sure. I think that I need to look at myself first and figure out what I can do to help that not happen.

"If that means we have to play different rotations, call different things, start differently in quarters than we are; whatever the case may be. There's an answer out there and we need to find it."

Kyrie Irving (14 points) exited the game in the second quarter after suffering a right knee sprain and didn't return, as the Celtics took a 74-53 lead into halftime.

Gordon Hayward scored 19 points to lead Boston. Jasyon Tatum (8 rebounds) and Terry Rozier each finished with 16 points a piece, while Marcus Morris added 15 points and 6 rebounds in the loss

The fifth seed Celtics are now 35-21 and will look to rebound from their back-to-back losses when they take on the new look Sixers in Philadelphia Tuesday night.

Celtics, who are 22-8 at home, led the entire game until the 6:02 mark in the final frame, when the Clippers took a 102-100 lead and Boston never recovered, as their 4-of-22 shooting in the third quarter proved to be the difference maker in the loss. The C's dropped to 42.4 percent shooting overall from the field to cap off the night after hitting well over 51 percent of their attempts in the first half.