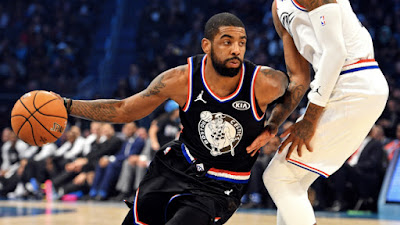 Kyrie Irving took full advantage of getting up some reps in preparation for the Celtics final 24 games of the regular season, as he finished with 13 points, 9 rebounds and 6 assists in 25 minutes of action during Sunday's NBA All-Star game.

Irving and Team LeBron beat Team Giannis 178-164 at the Spectrum Center in Charlotte, home of the 2019 All-Star Weekend. The Celtics star took a huge step in the right direction of his knee rehabilitation.

Irving strained his right iliotibial band in the Celtics loss to the Lakers on February 7 and his right knee simply buckled in the second quarter a loss to the Clippers two nights later. He was diagnosed with a knee sprain and he wouldn't step back onto a court until a week later when he served as a coach for Team USA against Team World in the Rising Star game.


"It's been too long since I've played the game," said Irving. "Like, I’ve shot a basketball twice in the last eight days, so just getting off my legs was good." [Celtics.com]

Though most believed Irving sustained his injury against the Clippers, he explained to the media that it occurred two days prior.


"That hit that I took in the Lakers game, really tightened up my (thigh tendon) and then my knee buckled in a way and I’m just thankful the strength in my quad caught it and it could have been a lot worse," said Irving. [Boston Globe]

On his knee: "It felt great. Like I said I missed (playing). I don’t ever want to take games off. But when it happens to do with my body and the investment that I put in, I’m just glad it’s at a high level," Irving said about playing in the All-Star Game. [Boston Globe]

The Celtics face the Milwaukee Bucks Thursday on the road and no one is more pleased than Irving with the progress he has made with his knee.


"I’m happy. I’m very happy," Irving said. "My strength and conditioning coach, my training staff, every single day it’s just been great communication with them, making sure that I’m good to play in the game. We understand that it’s the All-Star Game, but to go up and down before Thursday comes… shoot, I’d be a lot worse if I didn’t play in this game and then go out on Thursday and have that be my first time playing in about basically two weeks." [Celtics.com]

Boston is currently fourth in the East at 37-21, as Irving looks forward to staying healthy in order to being a part of the final stretch and push into the playoffs.


"It was good to get out and play the game that I love," he said. "Now, I’m just looking forward to next Thursday, and getting back with the team." [Celtics.com]