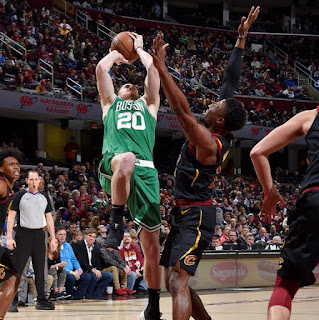 He played at Quicken Loan Arena for the first time since his gruesome injury back in 2017. On the same basketball court where his career was dramatically altered, Hayward admitted to feeling anxious but it didn't deter him from putting together one of his better performances of the regular season.

He efficiently attacked the basket and carefully picked his spots for open looks en route to 18 points on 9-of-14 attempts from the floor. The Celtics topped the Cavaliers, 103-96 and it was a special night for Hayward.


"I was a little anxious about it for sure, sitting in my hotel room last night just thinking about how everything changed," Hayward said. "Where I was sitting a year ago, from now. I'm just happy I was out there."

Being back in Cleveland certainly triggered memories of that fateful day. When Hayward was asked about the kind of things that went through his mind, it didn't take him long to answer.

It was a big night for him. Hayward has yet to fulfill the expectations many had set for him by this time of the regular season but playing in Cleveland for the first time since the day he suffered the worst injury of his career will benefit him from a mental standpoint.

Playing in Cleveland was something he needed to accomplish on his road to recovery. Hayward is going to have a role with the Celtics moving forward, one that may not be as established as members of the starting unit but Boston will need him to be a productive member of its rotation and Tuesday night was certainly another step in the right direction.

The Celtics will look to keep its home streak alive Thursday night when they take on the Lakers at TD Garden. Boston has won 13 of its last 14 games at home.