Kyrie Irving to sit out against the Sixers with knee injury 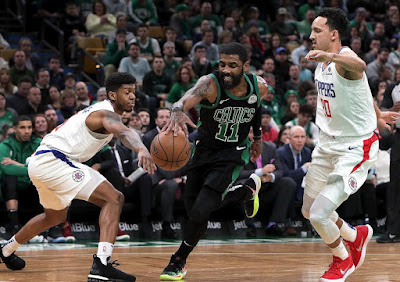 Kyrie Irving did not travel to Philadelphia with the rest of his teammates and has been ruled out for Tuesday with a right knee sprain, when the Celtics take on the new look Sixers.

It was announced that the Celtics All-Star was listed as day-to-day following the team's loss to the Clippers on Saturday night. Irving came up limping after awkwardly trying to fight through a screen with two minutes to go in the second quarter and did not return. An MRI revealed no structural damage to Irving's non-surgically repaired knee.


"Kyrie’s not going [to Philadelphia]," said coach Brad Stevens. "I have no idea what that means for Wednesday. Not playing [Tuesday]."

The Celtics return home on Wednesday night to host the Detroit Pistons on a second night of a back-to-back before the All-Star break.

Irving was present during workouts at the team's practice facility on Monday, but was dressed in sweatpants and did not participate, as he watched from the sidelines. Aron Baynes (foot) also didn’t travel with the Celtics and will not play in Philadelphia.

Boston is 7-2 this season when Irving has sat and are 2-0 overall against the Sixers. This is the first meeting between these two teams since the 76ers' acquisition of Tobias Harris prior to the NBA's trade deadline last week. The Celtics squandered away a 28-point lead against the Clippers without the help of Irving in the second half.