Rumors: Lakers 'pulled out' of trade talks with Pelicans for Anthony Davis 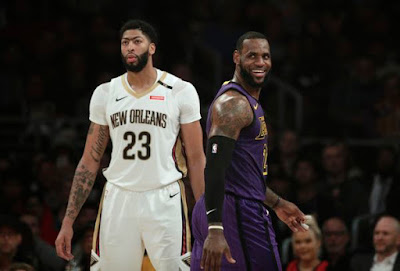 It looks like the Los Angeles Lakers are not going to acquire Anthony Davis before Thursday's NBA trade deadline.

According to Brad Turner of the Los Angeles Times, the Lakers have disengaged, at least for the time being, from any trade talks involving Davis due to the Pelicans' high demands


"The Lakers have “pulled out” of any more conversations in trying to acquire New Orleans All-Star Anthony Davis because of the Pelican’s “outrageous” trade requests, according to a person with knowledge of the situation not authorized to speak publicly."

The Lakers are still glad to engage with the Pelicans on an Anthony Davis trade, but no longer want to bid against themselves, league sources tell ESPN. Lakers are waiting for Pelicans to make a counter-proposal.
— Adrian Wojnarowski (@wojespn) February 5, 2019


The Pelicans are seeking all of the Lakers young talent plus several first and second round draft picks in exchange for Davis. Magic Johnson essentially does not want to compete with himself when it comes to talks with New Orleans, despite Davis' list of teams he would re-sign with, that includes the Lakers.

Adrian Wojanarowski of ESPN reported last week that the Pelicans were leaning towards waiting to move Davis in the offseason and dealing with the Celtics as a trade partner. Danny Ainge can offer a better package of young talent and draft picks, which reportedly means everyone on the roster except Kyrie Irving, who Boston plans to re-sign come July.

Though the Celtics are not on Davis' list of possible destinations, Ainge could have up to four first-round picks in this year's draft to offer New Orleans.

Davis requested to be traded a week ago and can't become a free agent until July of 2020. The All-Star informed the Pelicans via his agent Rich Paul that he would not sign a five-year, $239 million supermax contract this summer or next.