4 Reasons the Celtics topped the Sixers 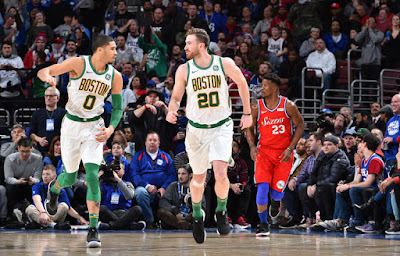 He said so following a much-needed win over the Sixers in what was the Celtics' first game since Morris called his team, three days prior. After topping Philly 112-109, the Kyrie Irving-less Celtics embraced one another on the floor at the Wells Fargo Center, following arguably their most impressive win of the season.

Here's four takeaways of what we learned about Tuesday night's Celtics team.

Philadelphia had a really tough time slowing down Al Horford. He was everywhere on both ends of the floor and they couldn't prevent him from scoring inside the paint and from the perimeter.

Defensively, Horford had the toughest assignment of the night and he made it look easy. For three quarters, he held Joel Embiid to eight points while Horford took advantage of offensive mismatches on the opposite end en route to 23 points on 9-of-16 from the floor.

He was the focal point of the offense, much like we saw throughout last year's Eastern Conference semifinals. Point forward Horford started the game by running high/low sets to Marcus Smart and Marcus Morris -- two players who had no problem scoring in the paint over  guys like Tobias Harris and JJ Redick. And Horford did a tremendous job of capitalizing on catching both Harris, Redick in the paint and taking the ball to the rim for easy layups.

We don't see this kind of offensive production from Horford -- specifically against Philly -- when Irving is in the lineup. He scored a combined 13 points in the Celtics' previous two meetings against the Sixers, however, Tuesday night, Horford reverted back to the kind of scoring we saw in last year's Eastern Conference Semifinals.

From the moment Gordon Hayward checked in and drained his first 3-point attempt of the night, you could tell he was dialed in. He had his game face going, a zero-hesitation attitude flowing through his jump shot and showed a lot of poise in his demeanor.

Hayward drained 6-of-7 from behind the arc on his way to a game-high 26 points Tuesday against the Sixers and what was most encouraging is that the bulk of his shots were contested and Philly still couldn't slow him down. He also drained a key 3-pointer down the stretch that was a big momentum-changer for the Celtics, the kind of shot that made you wonder, if this could turn into something Boston could rely on, imagine just how dangerous of a team it would be between now and throughout the postseason.

Tuesday night marked the third time this season Hayward has scored 20-plus points, two of which came in games when Kyrie Irving didn't play.

Players like Al Horford and Marcus Smart set the tone defensively from the beginning of the first quarter, and it resonated throughout the team until the final buzzer. Help defense was key; there was a sense of urgency.

Guys knew just when to force a double-team on guys like Joel Embiid and Tobias Harris. Boston forced 14 Sixers turnovers and strung together defensive stops in the midst of Philly's scoring runs, especially when they went on a 7-0 run in the final frame.

Jayson Tatum's aggressive offensive approach from start to finish was the kind of performance we'd like to see more often. In Philadelphia on Tuesday, the second-year forward wasn't settling for jump shots, forcing off-balanced shots or dribbling himself into a double-team -- traits of his game that we sometime see way too often.

Instead, he was attacking the basket, limiting his dribbles and knocking down open looks that were created organically in sync with the flow of the Celtics' offense, including a big 3-pointer towards the end of the fourth quarter that really made a difference in the Celtics' most unlikely win of the season. Tatum scored 20 points on 7-of-15 attempts but for him it wasn't necessarily about his point total, but rather how he went about getting his buckets.

Morris had so much fun in his hometown of Philadelphia, that he purchased each and every one of his teammates cheesesteaks sandwiches after the win.

What certainly stood out the most from Tuesday's win was the way the Celtics responded from Philly's scoring runs. It was the kind of response that was missing against the Lakers and the Clippers; the sense of urgency to not only string together defensive stops but to punch back offensively as well.


"Good teams have clunkers but good teams respond to those with the right effort and approach," Brad Stevens explained. "That was a good one and now we've got another tough one tomorrow night and we'll see if we can play well again. We're going to have to play with the same kind of purpose. I just thought the whole night we played the right way and we just tried to stay within ourselves and we didn't get too high or too low. We fought, and that's what you have to do to have a chance to win."