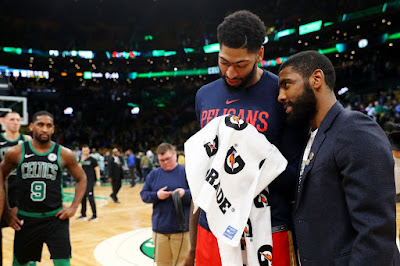 According to ESPN's Adrian Wojonarowski, the New Orleans Pelicans are leaning towards waiting for the summer to possibly strike a potential deal with the Celtics to move Anthony Davis.

Wojnarowski's report that the Pelicans prefer to deal with Boston as their trade partner comes out less than 24 hours after Davis' father sent a text to ESPN ripping the Celtics, saying the organization has "no loyalty."


"New Orleans has been leaning toward waiting until the end of the season to negotiate with the Boston Celtics, who have a larger pool of draft and player assets."

It's not a secret that the Celtics can offer the most young talent, along with a plethora of first-round draft picks to the Pelicans, more than any other team interested in Davis.

Though the Sacramento Kings, who owe the Celtics a pick (top-1 protected) this year, have surprised all basketball fans by actually competing for a playoff berth and the Memphis Grizzlies, who could hand over a top-8 protected selection to Danny Ainge in June, are looking to blow up their current roster by moving Marc Gasol and Mike Conley.

It's been a crazy week since Davis made his trade request, which led to rumors of Kyrie Irving  apparently still being uncertain of committing to Boston long-term, forcing the Celtics All-Star to respond with "Ask me on July 1," when addressing his future on Friday in the wake of the Knicks pulling-off a blockbuster trade to clear more $75 million in cap space.

If the Celtics, who now find themselves in a situation that dictates a wait-and-see-approach, don't end up with Davis, who they feel would entice Irving to remain in Boston, it could prove disastrous for a team who had high hopes of competing for championships with two top-10 players, plus young talent on their roster and end up with neither superstar.


"Boston can consummate a deal for Davis in July, once Irving becomes a free agent. Boston has been encouraging New Orleans to bypass the deadline and wait until after the season to work with them on a deal for Davis, sources said. The Pelicans are privately insisting that they would need to be 'blown away' to accept a trade in this short window before the trade deadline."

The Lakers reportedly are the first team to make an offer for Davis, centering a trade package around Kyle Kuzma, Lonzo Ball, a first-round pick and expiring contracts, to somewhat challenge the Celtics who could counter Los Angeles' offer with the likes of Jayson Tatum, Jaylen Brown and multiple first-round picks for starters.

Wojanarowski earlier in the week made an appearance on ESPN's NBA Countdown and expressed how the Pelicans still want to make a push towards the postseason and are in no hurry to move Davis before the February 7 trade deadline. With that being said, plus the "Rose Rule" effecting the Celtics from being able to acquire Davis this season, Ainge has made everyone available to New Orleans except Irving.


"Essentially, having Boston in the bidding, a really motivated team to try to acquire Anthony Davis it only elevates everyone else’s offers in the trade process and Boston is going to be there. And I think, Boston has sent a message to the Pelicans, ‘Be patient. Wait for us, we are going to be in this and we’re going to be willing to talk about essentially everyone on our roster outside of Kyrie Irving.’ So, I think right now it’s put New Orleans very much in a holding pattern and it’s really dampened the possibility of the [Los Angeles] Lakers being able to do what they’d love to do, is get a deal done prior to the trade deadline. New Orleans has no interest in acquiescing Anthony Davis to the Lakers right now."

Clearly it's going to be a bidding war between Magic Johnson and Danny Ainge for Davis' services despite rumors of any other teams involved. All the Pelicans have to do is patiently sit back and listen to the Lakers' and Celtics' assets get thrown on the table, one after another.