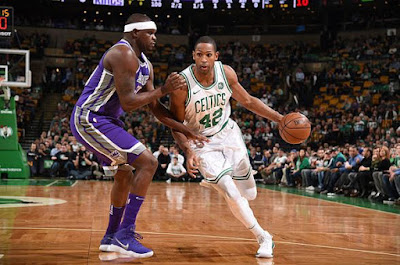 The Celtics have 24 games remaining on their regular season schedule before the playoffs and they currently have an open roster spot.

Following the trade of Jabari Bird nearly two weeks ago to the Atlanta Hawks at the NBA trade deadline, the Celtics will look to fill that open spot for a postseason run. If Boston wants to compete with the Bucks (added Nikola Mirotic) and the Raptors (traded for Marc Gasol), Danny Ainge should be searching the buyout market for a quality big.

The recent play of Al Horford has masked the fact that Aron Baynes has been in and out of the lineup with hand and foot injuries this season. Plus the development of rookie Robert Williams III, who has shown flashes here and there in very limited playing time, has also battled injuries, mixed with the below average one-on-one defense of an undersized Daniel Theis, the Celtics could benefit with some help in the middle.

While the likes of Enes Kanter (reportedly signing with the Trail Blazers) and DeAndre Jordan, who the Knicks plan to keep are not available, here are a few big man options as possible buyout candidates that Ainge should consider:

At 37, a 6-foot-9 "Z-Bo" is still a serviceable big that can man the middle, given his resume. Randolph, was traded to the Mavericks by the Kings and hasn't played this season, but has been waived and is awaiting that phone call from a playoff team. The Celtics could use a career 14.5 points and 7 rebounds a game big that has deep postseason experience, who can shoot the 3 and bang down low.

Though still not officially bought out by the Bulls yet, Lopez gave the Celtics fits in the paint two postseasons ago and has been a solid double-digit scorer over the prior six seasons. He fell out of Chicago's regular rotation this year, especially after the firing of Fred Hoiberg. Still only 30-years old, the seven-foot Lopez can give the Celtics a boost off the bench on both ends of the floor. The Warriors are already rumored to be interested if and when Lopez is waived.

The 6-11 "Polish Hammer" has been waived from the Clippers and started 43 out of 47 games played this season for Doc Rivers. Obviously, not in the Clip's long-term plans, Gortat can score and rebound, especially on the offensive glass. Celtics fans remember the Wizards series in 2017 where Gortat averaged nearly 10 points and 11 rebounds in seven games. Another deep playoff run is exactly what Gortat needs to get what could be his last contract of his career at age 34.

Probably the least sexiest of the bunch, but Monroe was pretty solid for the Raptors (5 points, 4.1 rebounds) in just 11 minutes of playing time per game for the Raptors this season before being moved at the deadline to make room for Marc Gasol. Still only 28, Monroe is already familiar with Brad Stevens' system where he scored 10 points and grabbed 6 rebounds in 26 regular season games for the Celtics during the 2017-18 campaign, but the playoffs were a different story. If anything, "Moose" could be an extra six fouls to spare while given others a breather.

Speaking of former Celtics bigs, would Ainge be interested in re-signing either Kendrick Perkins and or Tyler Zeller, who are also available?