Playoff home court advantage is quickly slipping away from Celtics 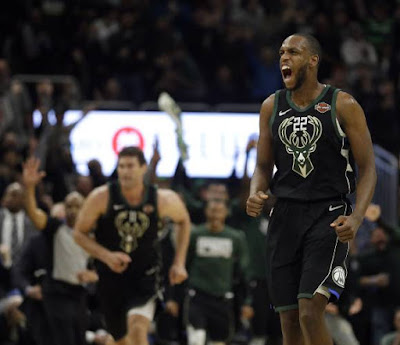 If the Celtics are going to make a deep playoff run this year, they're going to have to do it the hard way -- on the road.

Following their loss against the Bucks Thursday night, the Celtics are now 6.5 games behind Milwaukee for first place and surrendered the season series after dropping a one-point deficit, 98-97 in their third and final meeting of the regular season against the Bucks. It doesn't get much easier from here on out; there's only 24 games left in the regular season and not only are there playoff teams like the Raptors, Trail Blazers, Warriors, Sixers, Nuggets, Spurs and Pacers waiting for the Celtics but 13 of those final 24 games are on the road.

Kyrie Irving's potential game-winner fell short after Bucks guard Khris Middleton's go-ahead 3-pointer found the bottom of the net to break a 95-95 tie. Irving may have had a split second to dish out a pass to an open Al Horford behind the arc and Marcus Morris was hacked in the paint by Middleton but it didn't excuse the Celtics from their poor defense late in the fourth quarter.

If the playoffs started today, Boston would start in Philly, take on the Bucks in the second round and face the Raptors in an Eastern Conference Finals matchup, if they were to make it that far. It's the toughest road the Celtics could ask for, however, they brought this on themselves.

The growing pains of the 2018-19 campaign saw the Celtics start the season 10-10, catch losses against lowly teams like the Mavericks, Knicks, Suns and have a 15-14 record against current playoff teams. At this point, the Celtics would settle with catching the Pacers for third place.

For a team that has been successful on their home court -- where they're 23-8 -- the Celtics will take on a daunting task, starting in April. Boston (37-21) is currently 14-13 on the road and have especially struggled in closing out close games.

There's 4.5 games between the Pacers and the second-placed Raptors. Indiana, currently playing without All-Star guard Victor Oladipo, have won six of their last seven games but have two more matchups against the Celtics before the end of the regular season. It'll be two golden chances for Boston to catch Indy for third place before the start of the postseason.

Although catching the Pacers won't give the Celtics home court advantage, it'll avoid facing a team like the Sixers in the opening round and taking on a team like the Nets or Hornets in a best-of-7 series instead. For now, it's the ideal goal for the Celtics -- a team with the odds stacked against them in the east but have luckily built a cushion between fifth and sixth, where the Nets sit eight games back.

Still, the Celtics certainly have their work cut out for them. They will take on the Bulls in Chicago this weekend but will have a challenging matchup against the revamped Marc Gasol, Kawhi Leonard, Kyle Lowry and the Raptors in Toronto next week.