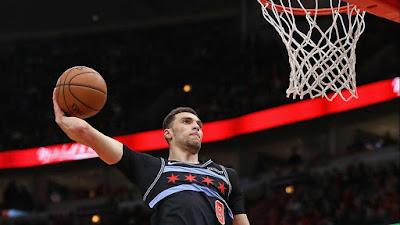 Don't worry Celtics fans, Kyrie Irving believes everything is going to be okay.

It was a dismissive attitude that made you wonder just how good will Irving be between now and the end of the Celtics' postseason run. His 37 points on 14-of-24 from the field to go with his 10 assists and 5 rebounds was an impressive stat line in Chicago but wasn't enough to knock off the Bulls. Chicago played just as well as any other team Boston has faced all year long.

Zach LaVine's career-high 42 points alongside Lauri Markkanen's double-double (35 points, 15 rebounds) led Chicago's efficient offense that tacked on 126 points while shooting 53.4 percent from the floor. The Celtics' defense once again struggled in slowing down their opponent in the second half, yet, their All-Star point guard has already moved on from Saturday's loss and is confident the Celtics will have no problem beating a team in a best-of-7 series throughout the playoffs.


"I don't get frustrated about this stuff anymore," Irving explained. "It's just part of the regular season. In the playoffs, when we can plan for a team, prepare for a team, I still don't see anybody beating us in seven games."

With the fourth-worst record in the league, the Bulls (16-44) grabbed a 25-point lead in the second half and never gave it back as they cruised to a double-digit win. Al Horford added 19 points, while Jayson Tatum and Marcus Morris each finished with a dozen points.

Meanwhile, Celtics head coach Brad Stevens once again pointed the finger at himself throughout the night and expressed his frustration after Saturday's loss.


"I've said this before, I'm disappointed in myself" Stevens stated. "And I've gotta do better."

Still, Irving is confident he can put the Celtics on his back and compete through Eastern Conference opponents. It'll be the first time he's done so without the league's best player -- LeBron James -- on his side but that hasn't wavered his confidence in how well he believes he can perform in the postseason.

Yet, he believes he's enough to bring Boston to the promised land, despite the fact the Celtics are seven games behind the Raptors for second place in the Eastern Conference, haven't shown any signs of turning things around since before the All-Star break and are on pace to face three of the toughest teams in the conference if they plan on making a run at the NBA Finals.

Bulls: Out-rebounded the Celtics, 49-32, including 11 offensive rebounds that turned into 17 second-chance points