Anthony Davis on possible trade to the Celtics: "They are on my list" 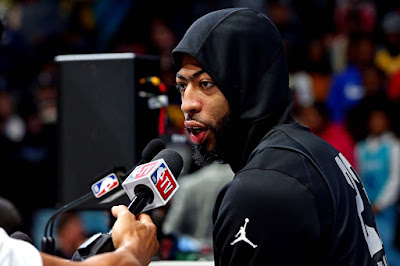 New Orleans Pelicans star Anthony Davis didn't mince words when asked about his pending trade request and that the Boston Celtics were actually one of his preferred destinations, despite previous reports.

Davis, who spoke to the media after Saturday's All-Star practice, clarified his stance on possible landing spots and answered "I never said Boston is not on my list," when asked about not wanting to be traded to Celtics.


Anthony Davis is asked about the Boston Celtics not being on his list. “They are on my list.”
— Tim Bontemps (@TimBontemps) February 16, 2019

Anthony Davis was asked about the perception the Celtics were not a preferred destination. He then repeated several times: “They were never not on my list.”
— Tim Bontemps (@TimBontemps) February 16, 2019


While there was speculations of Davis wanting to be moved to the Los Angeles Lakers or simply just signing with the purple and gold in the summer of 2020, as it was known that Boston couldn't trade for the Pelicans' All-Star prior to the NBA trade Deadline, due to league rules.

It was reported earlier this week that the Celtics believed Davis' agent Rich Paul planted a story about Kyrie Irving still being un-sure he would re-sign in Boston.

The Pelicans fired their general manager Dell Demps on Friday afternoon just two weeks after Davis announced he would not sign a 5-year, $240 million supermax deal to remain in New Orleans and wanted to be traded, via a statement made by his agent Paul.

The Celtics are arguably the best team with the most assets, including young talent, such as Jayson Tatum and Jaylen Brown, plus draft picks to entice the Pelicans come this offseason.

Davis is averaging 28.1 points, 12.9 rebounds, 4.2 assists in 45-games this season. He is expected to play in Sunday's All-Star game, despite being listed as day-to-day with a sore shoulder.