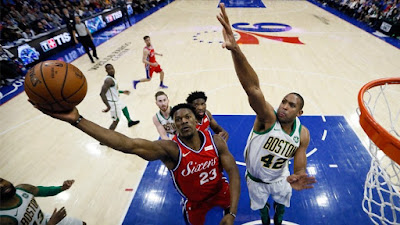 The fifth place Celtics were short-handed but it didn't matter on Tuesday night when they beat the Sixers for the third time this season, 112-109 at the Wells Fargo Center.

Gordon Hayward, who hit a go ahead 3-pointer with 1:50 left, finished with a game-high 26 points on 6-of-7 shooting from beyond the arc. Al Horford scored 23 points to go along with 8 rebounds and 5 assists for the Celtics, while Jayson Tatum notched a double-double with 20 points and 10 rebounds.

Boston, who are now 36-21, were without Kyrie Irving (knee) and Aron Baynes (foot), while looking seemingly like a team in turmoil following a loss to the Clippers on Saturday and comments from Marcus Morris about the lack of fun in recent weeks.

Joel Embiid led the 76ers with 23 points and 14 rebounds, while Jimmy Butler added 22 points and 9 rebounds in the loss at home. Ben Simmons and JJ Redick each finished with 16 points a piece.

Celtics led 106-103 with 1:27 left in the final frame before Butler missed two of three free throws to tie the game. Philadelphia would only get within one point, as Boston never forfeited their lead the rest of the way. Newly acquired Tobias Harris had a rough shooting night (4-14), chipping in 10 points and 8 rebounds, missed a potential game-tying 3-point attempt in the final seconds.

The Sixers had one more chance to send the game into overtime when Butler didn't get off a desperation 3 in time before the final buzzer sounded.

Both teams have the same identical records, except the Celtics are now the fourth seed, as they officially own the tie-breaker over the 76ers. Boston is now 7-1 against Philadelphia since their playoff series last season.


"Good teams have clunkers, but good teams respond to those with the right effort and approach," Celtics coach Brad Stevens said in his postgame presser.

The Celtics will look to take advantage of their current momentum on Wednesday night when they host the Detroit Pistons at home before having a week off for the All-Star break.

Boston hit 47 percent of their shots from the field, including going 13-of-29 from 3-point land. The Celtics are now 7-2 against Philadelphia, Toronto, Indiana and Milwaukee this season, while also being 8-2 without Kyrie Irving in the lineup.