Rajon Rondo on game winner: 'This is one I'll be playing for the rest of my life' 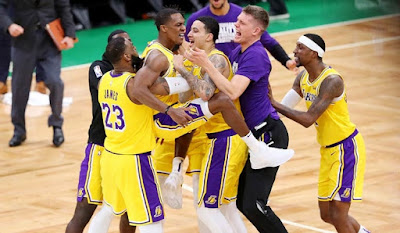 The 13-year pro who spent nine seasons in Boston, drained a game-winning jumper that topped the Celtics, 129-128, not only in front of thousands of Celtics fans at TD Garden but with his former teammate Kevin Garnett sitting in the front row. For Rondo and Garnett, coming back to the place where they helped raise a championship banner is always special but it was especially sweet for Rondo, who will remember Thursday's game-winner for the rest of his life.


"I practice those shots all the time," Rondo said after the game. "Couldn't imagine it here in the Garden though. It's surreal, it's unbelievable."

Rondo played in two NBA Finals against the Celtics' oldest rival Lakers. Now, as a member of the Lakers, it was fitting for the veteran point guard, currently in his first season with Los Angeles, to return to the Garden to take down the team that drafted him back in 2006.


"Obviously, I'm pretty familiar with the rivalry," Rondo said. "Obviously, I'm very happy that the fans here cheered me on during introductions but other than that, it's still basketball at the end of the day. Like I said, my team came in here and we got the W."

Rondo's teammate LeBron James knew how special the moment was for Rondo, as well.


"I think for Rondo, he couldn't even dream of that moment," James said. "To be back here in the Garden where he won a championship, obviously, has so many memories of being here. For him to get his hands on the ball at that moment and be able to knock that down, it was a storybook ending."

Donning Rondo's old school green-and-white Celtics uniform, Garnett wasn't far from the Lakers' celebration. Although Rondo couldn't hear him clearly, he certainly felt his presence, he joked, "that's my brother" when asked about Garnett's reaction to his shot.

Garnett arrived at TD Garden hours before tip-off. He was seen taking in shoot around alongside Metta World Peace on the baseline, chatting with a number of different players -- including Rondo, Marcus Smart and Jayson Tatum -- coaches, reporters, and arena employees.

It turned out to be a very special night at the Garden.

"This is one I'll be playing that for the rest of my life," Rondo said. "I'll never forget it."