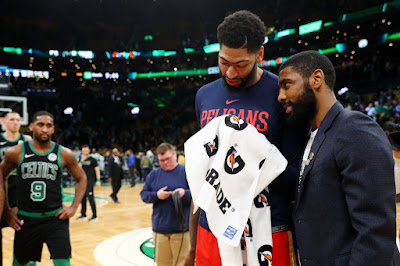 It's no surprise that Anthony Davis' agent Rich Paul tried to orchestrate a deal for his client to be traded from the New Orleans Pelicans to the Los Angeles Lakers before last week's NBA trade deadline, but the deal failed to go through.

Davis remains in New Orleans and every team has to wait until the summer to try and make a move for the All-Star.

The Celtics couldn't trade for Davis prior to the deadline, due to a league rule that both Irving and Davis can't be on the same roster under their current contracts. The Lakers reportedly offered the Pelicans a lot of pieces before "pulling out" of trade talks, knowing that Boston couldn't enter the bidding or offer a better package until the offseason.

According to Sean Deveney of the Sporting News, the Celtics were not happy with Rich Paul, who also represents LeBron James, and which the process of Anthony Davis' trade request was made that began rumors regarding Kyrie Irving's future in Boston.


"The Celtics were annoyed by the story of Irving having eyes for New York, not because of Irving, but because they felt the story was planted by Davis’ agent, Rich Paul, in order to scare the Pelicans into thinking Boston would back off making a trade offer for Davis in July if Irving left.

"It was cheap and underhanded," one source told SN.

The rumors that Irving, who wouldn't confirm his willingness to remain in Boston long-term, was still unsure if he'll re-sign or head elsewhere, which is why Davis reportedly is not interested in being traded to the Celtics, doesn't seem like a coincidence based on Deveny's story.

Danny Ainge will still have a shot to acquire Davis to pair him with Irving in Boston, which would make a dominate duo and rule the East for years to come. Whether that means Jayson Tatum would be included in a possible deal for the Pelicans forward, it remains to be seen. Though Rich Paul would prefer for Davis to pair up with his top client; LeBron James in Los Angeles, ultimately New Orleans will have a decision to make within the next few months.