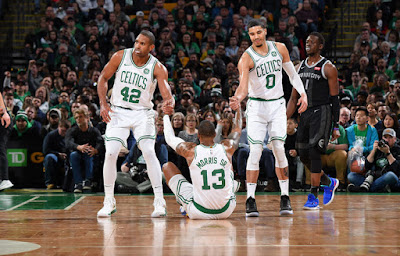 When Celtics forward Marcus Morris labeled his team a group of individuals instead of a team, it lit a fire under his teammates.

According to Morris, the feedback was positive. Most of the Celtics agreed with the harsh criticism and ever since last Saturday night -- when Boston dropped its worst loss of the season against the Clippers after blowing a 28-point lead -- it's been the veterans big man Al Horford that has stepped up in absence of Kyrie Irving.

It starts on the defensive end and triggers the kind of offensive production we've seen throughout the Celtics' past two wins before the All-Star break. Offensively, Gordon Hayward lit up the Sixers for 26 points and Morris has combined for 28 points in his last two outings and it's been Horford, who's taken the reins.

He's been vocal on the floor with his teammates, directed youngsters like Jaylen Brown and Jayson Tatum on where they need to be and has maintained the high-level of intensity throughout the last two games. On Wednesday night, Celtics started the game with the same defensive effort we saw the night prior; an impressive feat for the second night of a back-to-back.

The stops led to offense and a 34-20 third quarter, when the Celtics outscored the Pistons after halftime before Detroit made it interesting in the final frame when they made it a single-digit deficit but eventually succumbed to a 118-110 defeat. However, Horford's 9 points in the fourth along with his stifling defense made it difficult for the Pistons and continues to be the difference-maker in the second half of close games.


"These were the ones you had to gut out," Brad Stevens after the game. "(Just) like yesterday, you had to gut out because of how you felt going in. There was a reason to be down on Sunday, there was a reason to be licking your wounds a little bit and then Monday's practice was good; you felt like we were headed in the right direction. I thought we'd play well yesterday but that doesn't mean you're going to win and to come out with that one, and back it up with another physical team that had been playing really well, that was fully healthy.

"This was a good two days this group. I thought it showed a lot of good, good character and hopefully, we can enjoy the rest."

When the Sixers came close to closing the gap Tuesday night in Philadelphia, Horford anchored the Celtics' defense down the stretch as Boston held onto to a 112-109 win. The veteran big man's leadership has resonated throughout his teammates, while Horford's backed up his talk with some of the best basketball we've seen all year long from him.

He flirted with a triple-double Wednesday night (17 points, 14 rebounds, 8 assists) and led with a game-high plus-26 game rating. After Tuesday's win, Horford even put a new spin on the Celtics' '#SeeUsRise' campaign to coincide with lack of team unity that Morris pointed out over the weekend.

He used '#RiseTogether' on a recent post, which may have been already used by the Toronto Defiant, an e-sports gaming league based out of Toronto, still, Horford's heart was in the right place. And the Celtics co-signed Horford by using it in their pregame tween prior to Wednesday's game.

Boston not only leapfrogged Philly for fourth place in the Eastern Conference standings, the victory gives the Celtics the season tiebreaker, now that they've defeated the Sixers three straight, with the fourth and final meeting coming next month. However, the schedule doesn't get any easier on the other side of this week's upcoming All-Star break so Boston still has its work cut out for itself.

The Celtics will take on two of the top three teams above them in the standings on the road before facing three of the top four Western Conference powerhouses. Sandwiched between the elite teams are favorable matchups against the Bulls and Wizards, still, the Celtics will find themselves in the midst of the toughest seven-game stretch of the regular season.

Whether or not the return of Kyrie Irving, who Brad Stevens said prior to tip-off Wednesday night should be days away from being healthy enough to play. The Celtics can only hope that their recent success will carry over to next week and alongside their All-Star point guard.