Report: Jayson Tatum expected to be a major piece in Anthony Davis talks 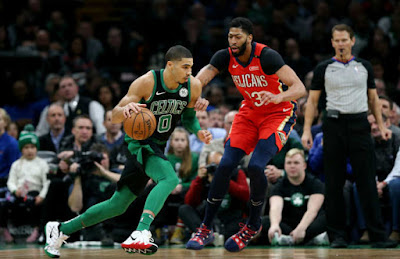 The Anthony Davis saga continues with less than 24 hours before the NBA's trade deadline, which is at 3 PM ET on Thursday afternoon.

While the Los Angeles Lakers have reportedly "pulled out" of talks with New Orleans and are awaiting to hear from Pelicans' GM Dell Demps, the Celtics are also interested in the five-time All-Star, but can't get in on the Davis sweepstakes until this summer.

One name that continues to be thrown around in a potential deal for Davis is Jayson Tatum. Despite an initial report the Celtics didn't want to include Tatum in a trade package to New Orleans, Danny Ainge is also not directly dangling the second-year forward to the Pelicans either.

According to Sports Illustrated's Chris Mannix, the Celtics involving Tatum in such talks is a top priority, especially if Davis is not moved past the trade deadline.


"As the Pelicans field offers for Anthony Davis, Boston's message to New Orleans has been direct: Wait. Wait, and we will come to you with an offer that will make it worth it. Wait, and you can raid our stash of draft picks. The Celtics have refused to directly dangle Jayson Tatum, two sources familiar with the situation told SI.com, but the Pelicans have been left with the impression that if Davis remains on the roster past Thursday, nothing is off the table."

If anyone could pull off a trade for Davis, while holding on to Tatum, Ainge is that guy. The Celtics could convince Davis that he, Kyrie Irving and Tatum would be Boston's new Big-3, thus re-signing a long term deal.

Davis has made it clear that the only teams he'll sign with if they acquire him are the New York Knicks, Los Angeles Lakers, Los Angeles Clippers and Milwaukee Bucks, which are also his preferred destinations. The Celtics are not on that list and per Marc Stein of The New York Times, Davis "remains adamant" that he will not re-sign in Boston if they were to trade for him at any point.


Sources say Davis, meanwhile, remains adamant that he will not sign a long-term deal with Boston if the Celtics trade for him in July and that he would like to play out the rest of the season for the Pelicans if there's no trade by tomorrow's deadline
— Marc Stein (@TheSteinLine) February 7, 2019


Sam Amick of The Athletic reports that the Celtics have had many discussions with the Pelicans already regarding Davis, while Tatum has been the centerpiece of a potential deal.


"This latest Lakers-Celtics subplot would be dead by now if Ainge had been scared off, but sources say Boston — which can’t trade for Davis until this summer because of the well-chronicled "Rose Rule" — is continuing its complicated pursuit of the five-time All-Star in spite of the message being sent through various channels that he doesn’t want to play there. A source with knowledge of the talks said the potential centerpiece in a Pelicans package, 20-year-old Celtics small forward Jayson Tatum, has been discussed extensively by the two teams and is expected to be a major part of the talks when June rolls around. So long as Davis isn’t in purple and gold by then."

The Celtics would be taking a major risk by trading for Davis as a possible year rental, while losing Tatum and also having Irving, who is now uncertain he'll stay long-term in Boston, walk during free-agency. That would be a huge step backwards to a team that planned on having clear championship aspirations for many years to come.

Tatum, 20, is averaging 16.3 points on 45 percent shooting from the field and 6.2 rebounds for the Celtics this season.