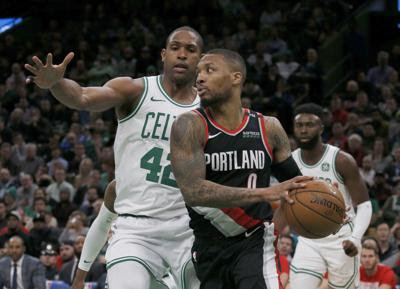 If there's one thing we've learned about Kyrie Irving's since the All-Star break, it's that he's more than ready for the postseason.

He's ready to move on from the regular season. With 21 games left, Irving can't wait for the playoffs. He told reporters following Saturday's loss against the Bulls that there's no other team that can top the Celtics in a best-of-7 series and then reiterated that statement Wednesday night following Boston's 95-92 loss against the Trail Blazers when asked about how important it is for the Celtics to climb the Eastern Conference standings.


"You can't worry about the standings now, it's too late in the season," Irving explained. "Obviously, the four-five spot but one-two is pretty much locked up, one/two/three. So just play, as long as we get there.

Irving delivered an exceptional performance against Portland -- he finished with 31 points on 14-of-24 in a losing effort as the Celtics dropped its fourth consecutive loss. Jayson Tatum added 14 points while Al Horford and Marcus Smart each finished with 13 points and five assists.

Meanwhile, Damian Lillard's game-high 33 points was the highlight of the night. He weaved through defenders, got to the rim and crushed the Celtics' chances of closing the gap down the stretch, Maurice Harkless finished with a double-double (17 points, 10 rebounds) and Jusuf Nurkic chipped in 16 points, 6 rebounds.

Boston's best chance of tying the game late in the final frame while facing a five-point deficit with less than a minute left, came when Marcus Smart took an ill-advised 3-pointer that led to the Celtics giving up an easy layup by Lillard on the opposite end.

Still, Irving let the defeat roll off his back before reminding reporters of his days in Cleveland and how the Cavaliers would respond in the face of adversity when few expected them to.


"It's part of the NBA season, you never know," Irving said. "I've been a part of two organizations, one where I was in Cleveland. In 2017, we're down the stretch and we lose a bunch of games in a row. We end up sweeping the whole Eastern Conference. I don't think anybody in the Eastern Conference could really compete with us at a high level when we're playing the way we're supposed to be playing."

This isn't the first time Irving has used his time in Cleveland as a point of reference for the Celtics' regular season hurdles. It feels like it's been a while since we've seen the Celtics play its best basketball and the 2018-19 Celtics campaign pales in comparison to the 2016-17 Cavaliers.

For starters, there isn't a single member of this year's Celtics team that resembles the kind of production LeBron James supplied for the Cavaliers and as for Boston's starting lineup, finding the kind of production that we saw from Irving and Kevin Love in 2017 isn't consistent enough to compare two entirely different teams. Six weeks ago, when Irving was asked about how he could take what he learned from Cleveland and implement it to this year's Celtics, he laughed it off and agreed that comparing what happened with the Cavs to his current team wasn't a fair comparison.

Asked Kyrie Irving if the struggles the #Celtics are facing remind him of the hurdles he faced in Cleveland “It’s no comparison” -Irving
A post shared by Josue Pavon (@joe_sway10) on Jan 12, 2019 at 11:37pm PST

Agreed. The Cavaliers team that was led by veterans is a much different situation compared to this year's Celtics, especially without the best player in the league leading the way.

Yet, Irving is up for the task. Whether the Celtics head into the postseason with or without any momentum is irrelevant because in his eyes, Boston will only go as far as he can lead them and with his confidence at an all-time high, Irving believes he can carry his team through the Eastern Conference.

But what happens if his supporting cast checks out or even worse, is unable to deliver under the pressure of taking on top echelon teams that have not only improved its rosters prior to the trade deadline but will have home court advantage in its respective best-of-7 series. What will Irving say then?

Trail Blazers: Portland doubled up the Celtics at the free-throw line -- where they made 15-of-20 attempts, while the Celtics finished 7-of-10.

Celtics: Boston shot better from the field than its opponent (46.5 percent) compared to the Trail Blazers' 42.2 percent clip, however, late-game execution coupled with Portland outscoring its opponent, 31-22 in the third quarter was enough to keep Boston at bay.