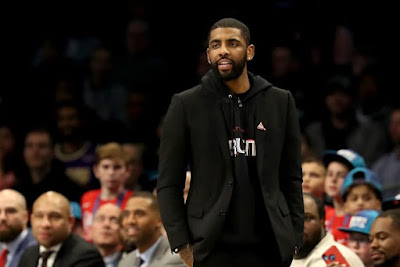 The lone Celtics All-Star, who made his coaching debut in the Rising Stars Challenge, as fellow Celtic Jayson Tatum and Team USA cruised to a 161-144 victory over Team World on Friday night, spoke to the media about his decision to suit up.


"I’ve been resting for a minute, the treatment, it’s not fun," Irving said following Saturday morning's All-Star practice. "It’s not fun doing that stuff everyday. It’s part of the job, trying to stay in shape; not being on the court as much as I would like to be. But it really just puts in perspective just how much I know my body. That’s the most important thing."

Irving's return comes at the right time for the Celtics, as they're ridding a two game win streak after beating the new look Philadelphia 76ers and the Detroit Pistons on back-to-back nights prior to the break.

Though not many will agree with Irving's choice to participate in Sunday's exhibition, the Celtics star has considered this as a part of his rehab process.


"It factored in a lot," Irving said. "For me, I just wanted to go out there and play if I had the opportunity. I do get paid to play basketball. So being off for seven days, six days, doing what I can to prepare my body and being able to go up and down before I play next Thursday [at Milwaukee]. I was like, 'hey, if I have the opportunity, great. If I don’t...I wasn’t going to be sad or anything like that. I’m grateful for the opportunity to be an All-Star. There's not too many chances you get to be around Kawhi Leonard, being around KD [Kevin Durant] and have a starting lineup like we do. That was on my mind, but it didn’t factor going in to taking care of my health and making sure I’m good to play."

Both Celtics coach Brad Stevens and president of basketball operations Danny Ainge have said last week that they were fine with Irving playing in the All-Star Game if he was medically cleared. Stevens went as far as saying he'd prefer that his star point guard get some reps in to serve as preparation for the team's last 24 games of the regular season.

Irving, voted in as a starter, was selected as the second overall pick by his former teammate LeBron James, who was an All-Star captain and they will play against the team selected by the Bucks' Giannis Antetokoumpo.