Jayson Tatum says 'I love being on the Celtics, I want to play there my whole career' 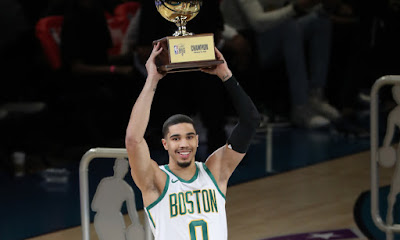 Fresh off a successful NBA All-Star Weekend for Celtics forward Jayson Tatum, who not only walked away with some hardware as the 2019 Skills Challenge Champion, but was victorious in the Rising Stars game as well.

Tatum scored 30 points on 6-of-14 shooting from behind the arc and grabbed 9 rebounds in Team USA's 161-144 win over Team World on Friday night. The Celtics second year man, coached by his teammate Kyrie Irving, was also in the running for MVP but came up short.


"It was awesome," said Irving of coaching his Celtic teammate. "I was trying to give (Tatum) the MVP. He had 30 and 9, but (Kyle Kuzma) was just going for it. It was fun to be around those young guys, like I said, but those guys are the future of our league. I'm excited to be kind of in this in-between stage in my career where I get to see them develop as young players, go through, getting extensions, making multiple All-Star Games, striving for their individual goals, but also how they grow in terms of their team environments. So I'm excited." [Yahoo Sports]

Tatum continued his hot shooting on Saturday night, as he hit a half-court bank shot to beat out Hawks rookie Trae Young in the finals of the Taco Bell Skills Challenge, becoming the first Celtics player in franchise history to win the competition.


In only his second year in the NBA, it's been quite the learning experience for Tatum, who has been the centerpiece of trade rumors surrounding Pelicans All-Star Anthony Davis.


"It didn't really bother me," Tatum said of being mentioned in trade talks. "I wasn't really fazed by it. A lot of it was rumors, I don't know if it was true or not, but my job is just to play basketball. I didn't get fazed by anything I saw on TV." [CBS Sports]

Despite news of Davis clarifying that Boston is in fact on his list of preferred trade destinations, making headlines over the weekend, Tatum knows the next five months of trade talks between Danny Ainge and New Orleans are out of his hands even if he has enjoyed being a Celtic and wants to retire as such.


"You start to understand that this is a business. I play basketball and I just gotta control what I can control, but I love being on the Celtics. I want to play there my whole career," Tatum said. [CBS Sports]

For now all Tatum can do is continue to focus on the task of playing the next 24 games remaining on the regular season schedule and make another playoff run toward an NBA Finals berth.

But if anyone is doubting that the Celtics forward wants to stay in Boston, just look at his last eight games where he's averaging 18 points on 48.2 percent shooting and grabbing 7 rebounds. Tatum has not only been aggressive in the paint and getting to the free throw line, he's also been the team's second leading scorer in that span where the Celtics are 6-2.

Tatum clearly doesn't lack any confidence as Boston currently has the fourth best record in the East at 37-21. Following his Skills Challenge win during All-Star Saturday night, the 20-year old forward made arguably the boldest prediction of the weekend, proclaiming that the Celtics would be the last team standing in June.

Get your popcorn ready.