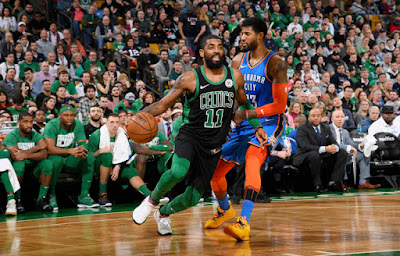 When the Celtics drafted Marcus Smart back in 2014, expectations were immediately bestowed upon the Oklahoma State product.

He was viewed as Rajon Rondo's replacement at the time, expected to lead a new era of Celtics basketball with Brad Stevens at the helm. Things didn't exactly go as planned.

Smart isn't the traditional point guard that some people had in mind; he's more of a combo guard, who can strengthen the back court's defense. He didn't thrive in the starting point guard role, he spent most of his Celtics career coming off the bench but has turned into the team's best on-ball defender.

This year, Stevens decided to insert Smart into the starting lineup and it instantly rubbed off on his back court running mate -- Kyrie Irving. The lone Celtics All-Star has added defensive stops to his repertoire alongside game-winning plays, offensively.


"Kyrie's in the right spot a lot," Stevens said after the game. "Obviously, that's always great when you can create a turnover in that play. He's got unbelievable instincts and he also has an unbelievable (ability) to recognize the biggest threat in the room."

For Smart and Irving, it goes both ways. The same way Smart's defense has suddenly triggered Irving to make defensive plays, Irving's shooting has rubbed off on Smart's offense this year.

He finished with 30 points, 11 assists and became the first Celtics player since Kevin Garnett (2007) to record four consecutive 20-point double-doubles. Marcus Smart drained 4-of-9 from deep on his way to 18 points and 7 assists.

No other Celtics player has encouraged Smart to shoot more than Irving. Whether Smart is having an off-night or lighting up the floor; Irving has publicly embraced Smart to keep taking shots and believes in Smart's shooting -- a part of his game that Irving says he's seen time and time again in practice and knows it'll inevitably translate throughout the game.

Smart is having the best shooting season of his career. For the first time, he's reached the 40-percent plateau in field goal percentage, including 36.4 percent from behind the arc -- where he used to shoot at a 25 percent clip.

Irving and Smart's performances on both ends of the floor held off Paul George's (37 points) big offensive night and Westbrook's monster triple-double (22 points, 16 assists, 12 rebounds). Steven Adams, who had a big defensive game against the Celtics, came up big for the Thunder; he finished with 16 points and 9 rebounds.

The Celtics' dynamic back court has been vital for their team's recent success. Boston has moved from fifth to third in the Eastern Conference, trailing the Raptors for second place by 3.5 games.