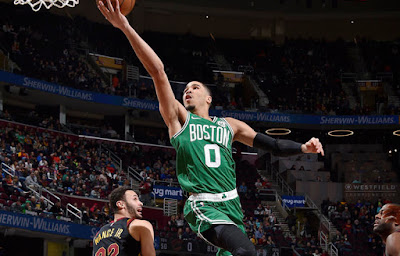 Boston continues to show its depth.

Adding another win on the season (35-19), the Celtics topped the Cavaliers, 103-96 at Cleveland Tuesday night with a short-handed roster. Kyrie Irving, Marcus Morris and Aron Baynes all had the night off while Terry Rozier, Jaylen Brown and Semi Ojeleye took on the extra playing time.

After holding onto a 101-91 lead with four minutes left to play, the Celtics fended off a 5-0 Cavaliers run down the stretch and held on in the final minutes. Boston has now won five straight games.

Heading into the regular season, much was made about the Celtics' depth -- one that was considered to be the deepest in the league. However, from a scoring standpoint, Boston's bench hasn't been one of the best.

The Celtics are currently 13th but continue to show progress at the right time, in the second half of the 2018-19 campaign. Throughout the five-game winning streak, the second unit averaged 42.2 points, a big difference from its 32.9 point average on the season.

Tuesday night was a great test. The short-handed second unit still delivered offensively, an impressive feat for the Celtics with guys like Brown and Terry Rozier inserted into the starting lineup.

Boston will look to keep its streak alive Thursday night against the Lakers when they welcome Los Angeles at TD Garden.

Celtics: Shot 48.8 percent from the floor on 40-of-82 attempts. Jayson Tatum was aggressive, he made a conscious effort in attacking the basket and it paid off, the majority of his production came from the paint and from his trips to the free-throw line -- where he netted a perfect 12-of-12.