Kyrie Irving responds to being cheered at Madison Square Garden 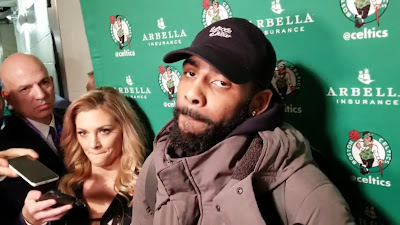 NEW YORK -- Brad Stevens is too focused on his team to worry about Kyrie Irving's long-term plans, and quite frankly so is Irving.

It's the kind of distraction Stevens and Irving thought would have evaporated when Irving made a verbal commitment prior to the start of the regular season but rumors surrounding his impending free agency only did the opposite. The All-Star point guard's conversation with LeBron James lit the match, Anthony Davis requesting a trade from New Orleans along with the Knicks clearing up cap space for two max deals come July 1 after trading away its cornerstone star Kristaps Porzingis engulfed flames and Irving's comments Friday morning at shoot around added fuel to the fire.

Will he head to the Knicks to team up with Kevin Durant, who some expect will ditch the Warriors for the Big Apple, reunite with LeBron James in Los Angeles or stick with the Celtics?

Irving isn't going to give you a definitive answer. If there's one thing we've learned from the All-Star superstar, it's that topics like that are discussed on his terms, when he feels like sharing. Not the other way around.

The same way Irving unexpectedly told Celtics season ticket holders at an annual preseason event that he plans to sign an extension when no one asked about his future or the way he revealed his conversation with LeBron when no one brought up his former All-Star teammate; Irving doesn't like feeling coerced to say what what everyone is dying to know. And when he feels the pressure, it agitates him.

It's the biggest reason why Irving lashed out at -- what was mostly Knicks beat writers -- Celtics shoot around Friday when he felt the pressure, one that was warranted by the acts of other players and organizations (Anthony Davis, Knicks). Following the Celtics' 113-99 win over the Knicks, game-related questions took a backseat to what reporters felt most compelled to ask Irving about.

'What did you make of getting all of the cheers and the 'We Want Kyrie' chants?'

"It's nothing but a distraction at this point," Irving responded. "I'm appreciative of fan support I get at any arena, of course coming back home. Obviously, what's going on in terms of that noise and commentary -- it's just a bunch of nonsense right now. Can't do anything about it so I'm just accepting, I'm appreciative but at the same time I have a game to focus on."

Stevens is trying to do the same. His team has won eight of its last nine games, is only three and a half games behind for second place in the Eastern Conference, still, he was asked about his thoughts on Irving's non-committal response about his future in Boston.


"I don't really have any thoughts," Stevens replied. "I'll let him answer all that stuff. As I've certainly read through it, it certainly wasn't just what was presented this morning. I thought obviously he said a lot of things that were positive about here but our focus has to be on playing well and ultimately we all want to get better and we all want to play better."

Boston is on the right track. The team is healthy and in rhythm to reach the conference's upper echelon just before February 14's All-Star break.

Still, Irving knows winning won't truly dissipate the distractions surrounding the team, while winning is the only thing he wants to focus on this year; winning a championship in Boston.


"You would hope it would quiet down but like I said, it doesn't help when across the league it's just outside noise again and my name gets thrown into it. Conversations, speculations, everybody's worried about their credibility. I don't know how this media empire works. I know it's a bunch of nonsense to me. I have a focus of winning a championship this year and that's where my focus is going to stay -- even me saying something like that isn't concrete enough for anybody. It is what it is."

Unless Danny Ainge is scared to see Irving walk and see the Celtics end up with nothing and is willing to part ways with his lone All-Star, it's all going to come down to Irving's decision this summer. But the best Boston can do to ensure he sticks around is to simply win games and make a push at winning a championship.

Sure, Irving will ultimately make the best decision for himself at the end of the day but there's no question or course of action that will force Irving to make a verbal commitment. Until then, the Celtics will play the waiting game and see its team unfold between now and the end of the season.


"I have to go home and take care of my family and friends and that's the stuff where it really matters for me," Irving explained. "Loving the game of basketball, that's where it's always going to be. I didn't do this for the media, I didn't do this for the money, I did it because I love the game and I work extremely hard on my craft, and I want to be one of the greatest ever. That's where my focus is. It's going to come (free agency), I'm appreciative of how grateful I am."

"I'm grateful of everybody identifying how talented I am, who wants to play for me, I'm appreciative of that but at the end of the day, like I said this morning, I'm going to make the best decision for me and my family and that's how it's going to go."