Marcus Morris explains his frustrations, why he called out team 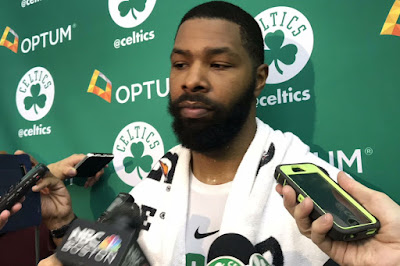 Marcus Morris spoke about his comments following the Celtics loss to the Clippers on Saturday night, where he admitted that it was a knee-jerk reaction and mainly out of frustration when he vented about his teammates.

On Monday, Morris stressed how he believes the Celtics have the potential to come together as a group and make a title run, rather than being focused on individual accomplishments. The Celtics forward felt like the rest of his teammates understood the message behind the notion that they are not having fun this season in hopes by voicing his concerns to the media, it will help rally the team before they boarded on their flight to Philadelphia.


"To me, it was just speaking real. I'm not really about to BS stuff,” said Morris. "I want to win a championship. I understand what it takes to get there basically every day. And I think that's why my teammates, they definitely accepted it, because they see that I'm a guy that comes in here and I put my hard hat on and come to work. I'm passionate about it, and I don't know no other way.

"To be in this position, to have a chance to compete for something like that, it means a lot to me, because you don't get this opportunity at all in this league. Eight years I've been here. It's not a crazy amount, but eight years I've been in the league, I never even thought I could win a championship with the teams I was on. And this team I feel a lot different about, and I just want to push us to that position."

Though Morris noted how he knows his coach would have preferred to keep his comments within the confinements of the Celtics locker room, Brad Stevens said he was fine with it just as long as Morris attached his name to the quotes.


"One of the things that we said at the very beginning of the year is that we don’t want to be a team quoted of unnamed sources. So if you’re going to say something, you’ve got to put your name next to it," said Stevens. "And Marcus’ frustrations were obvious and evident, and you know what, in a lot of ways, I thought he said a lot of stuff that you can’t really argue in the last two games. So we need to be a lot better than we were at finishing out games and handling adverse situations in games, and go from there. But as long as we can put our name next to it, I’m good."

Al Horford said the team addressed Morris' comments on Monday prior to their workouts and they are moving forward.


"It's not fun when we're not playing the right way," said Horford. "I just think it was a tough one. In the past two games, we've dominated teams at times, we just didn't come up with the results we wanted. I’m OK with [frustration]. I think it’s best that all these things happen now than come playoff time. … I think [the two LA losses were] a step back but I believe it will make us better in the long run."

Following Monday morning's discussion, Morris believes his teammates are on the same page when it comes to what he meant by his comments.


"For the most part, everybody agreed with me," said Morris. "Coach, he thought it was the right thing to say. More to the fact of I could have basically kept that in-house and talked to my teammates, but you guys caught me at a good time. I was hot. I just spoke what was real. I didn't take it out of context or point anybody out. I just said as a whole. I just felt like we've got to enjoy this process."

"We watched the film, we watched a couple of clips, and guys understood what I was saying. Obviously, to be that caliber team, that championship team, you have to really buy in. You have to enjoy what's going on. And as I look around the league, like I said, those top teams, it seems like they enjoy what's going on, win, lose, or draw. You’re going to have some ups and downs, but you've got to have fun with it.”

The Celtics, 35-21, will face the new look Sixers on Tuesday before coming back home to host the Pistons on Wednesday, followed by a much deserved week off for the All-Star break.