Danny Ainge on if the Celtics are better without Kyrie Irving: 'it makes no sense' 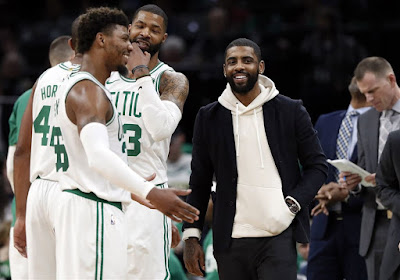 Celtics president of basketball operations Danny Ainge scoffed at the notion that his roster is better without it's lone NBA All-Star; Kyrie Irving. Going as far as saying "It's completely illogical. It makes no sense," when he made his weekly radio appearance on Boston's 98.5 The Sports Hub.

Irving, who has missed the Celtics' last two games with a knee sprain, made his way to Charlotte for this weekend's festivities. Whether he'll play in Sunday's midseason classic, remains unknown.


"If you just look at the data over the past two years our team has been so much better. It wasn't but a month ago that we were trying to figure out ‘how in the world are we going to score without Kyrie on the court'

"Kyrie is by far our most efficient offensive player, without question. And our team, when Kyrie is on the court over the past two years, is by far more efficient with Kyrie playing than when he's not. So no, I think it's ridiculous to think," said Ainge.

Ainge noted how playing alongside such legends as Larry Bird, who is considered one of the greatest of all time, he knew what it took to be a contender year after year in Boston.


"[Larry] knew that to win the big thing and to win it all, you can't be without those great players and that's how I feel about Kyrie."

The Celtics are 9-2 this season without Irving, who is averaging 23.6 points (on 49.8 percent shooting) and career highs in assists (7) and rebounds (5). Boston went 25-16 last year without their leader, including the playoffs, following two knee procedures that forced Irving to miss the entire postseason.

It's no secret that the Celtics are a much better team, especially in late-game situations this year when Irving is in the lineup. When asked about what he has learned from his All-Star teammate, forward Jayson Tatum had this to say:


"Just watching how he conducts himself, how he comes into work every day and continues to be one of the best players in the league for a reason. It's not by accident. He works at it. He's super committed."

Tatum also said he would have selected Irving as his No.1 pick, if he were an All-Star captain. Clearly 'Uncle Drew' has had a positive impact on his young teammates if you've been paying attention.

Irving has been listed as 'day-to-day' with his knee sprain, but could return as soon as Thursday when the Celtics face the East leading Milwaukee Bucks.