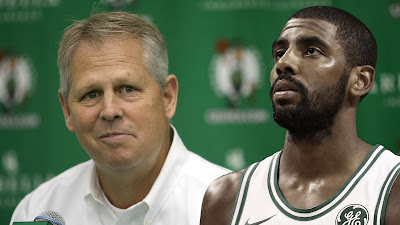 The Celtics stood pat for the third straight NBA trade deadline, as this is the roster that they believe will make a run through the East and possibly the Finals.

While talks regarding a possible Anthony Davis trade between the Pelicans and Celtics have been put on hold for the next few months, one thing is certain and it's that Danny Ainge remains confident that Kyrie Irving will re-sign long-term in Boston come July.

Ainge, who made his weekly appearance on Boston's 98.5 The Sports Hub, spoke about Irving's recent comments on his future and expiring contract.


"I think a lot of people because of Kyrie’s announcement at the beginning of the year thought that there was a marriage," Ainge said. "I think it’s more like an engagement, and we’re gonna get married on July 1st, and I think that engagement is still on as far as I know in my individual conversations with Kyrie. We’re still engaged, but we really can’t make those vows, sign that contract, until July 1st." [MassLive]

Irving somewhat put to rest any uncertainty of him taking his talents elsewhere before the start of the regular season when the Celtics All-Star said he would definitely re-sign in Boston. But it's been an up and down type of year for the C's despite winning 10 of their last 12 games and having a 25-10 record since their disappointing 10-10 start.

Still Ainge is not worried about his superstar point guard leading a championship contending team this season and for many more to come, which is what Irving wanted all along; the opportunity to be  a leader, while also competing for titles.

Let's not forget Irving was given the No. 11, the same number his dad wore at Boston University, that he hopes will hang from the TD Garden rafters one day.

With rumors of Irving being connected to the Knicks or even the Lakers to reunite with LeBron James, it's obvious that Irving's recent non-committal quotes clearly stems from frustration with the media.

According to Ainge, Irving doesn't want anyone to assume what his plans are or if they're linked to what other elite free agents might possibly do.


"I think that he just doesn’t like his name in all these rumors and associated with all these other players, " Ainge said. "I think he likes to be his own man and have his own mind and his own opinions. But I feel like there’s still a chance that on July 1 he stays here and that’s what we’re shooting for. We still have a date on July 1st." [MassLive]

A lot can change in five months, but for now the Celtics feel good about their chances of Irving staying put beyond this season. After the teams ahead of Boston all made significant changes over the past 48 hours, the race to the NBA Finals won't be an easy one.

At 35-20, the Celtics find themselves with the fourth best record in the conference and are only four-games behind the second place Raptors. Barring any injuries, Irving will get his shot to finally lead a team into the postseason and Ainge can only hope that Anthony Davis is watching from afar, while contemplating the possibly of teaming up with one of his good friends in Boston to dominate the rest of the league.