Celtics trade Avery Bradley to the Pistons for Marcus Morris 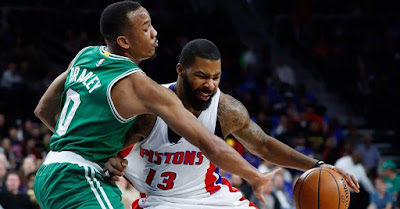 The longest tenured Celtic has been shipped out of Boston as the process of cutting salary to make room for the signing of Gordon Hayward is well underway.

According to Shams Charaina of The Vertical, the Celtics have reportedly traded two-guard and defensive specialist Avery Bradley, plus a 2019 second-round (according to ESPN) to the Detroit Pistons for power-forward Marcus Morris.


Bradley, arguably one of the league's best on-ball defenders, was set to make just over $8 million in the last year of his contract, while Morris will make $5 million this season and $5.35 million next year.

Morris, 26, is a six year veteran who has played for the Rockets, Suns and Pistons. The forward has had his best seasons the last two campaigns in Detroit averaging: 14.1 points and 5.1 rebounds in 80 games during  2015-16, while putting up 14 points and 4.6 rebounds in 79 games this past season.

Bradley, who's also 26, played all seven years of his professional career with the Celtics and was the last link to the Paul Pierce, Rajon Rondo and Kevin Garnett era.

The vet averaged a career-high in points (16.3), rebounds (6.1) and assists (2.3) in 2016-17, but missed 55 games mainly due to an Achilles injury. Bradley did return before the start of the playoffs and stepped up his game on both ends of the floor throughout the postseason as the Celtics advanced all the way to the Eastern Conferance Finals.