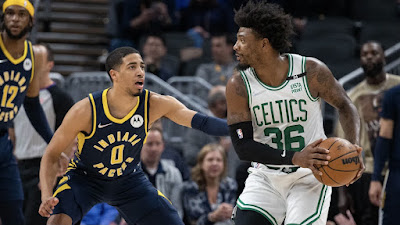 The Celtics came up short on a second day of a back-to-back, as they fell to the Indiana Pacers 128-107 Sunday at Gainbridge Fieldhouse.
Jayson Tatum scored a team-high 24 points, while Jaylen Brown had 23 points and eight rebounds in the C's second loss in their last 13 outings.
Payton Pritchard added 14 points off the bench and Marcus Smart chipped 13 points, seven assists for the Celtics, who are 36-27 on the season despite getting their seven-game road winning streak snapped.
Grant Williams started in place of Al Horford, who sat out due to rest and Robert Williams recorded another double-double with 10 points, 11 rebounds -- to go along with four blocks.
Indiana led by as many as 22 points, hitting 52.2% of their shots, including going 17-of-33 (51.5%) from deep against the league's best defensive team since January 1.

"We didn't come out as physical as we wanted to and it allowed them to get in a rhythm and it kind of snowballed on us," Boston coach Ime Udoka said. "Those guys were walking into 3s and a guy like Brissett started making some but they've got good 3-point shooters."

Oshae Brissett led all scorers with 27 points (6-of-9 from 3), while Pacers newcomer Tyrese Haliburton finished with 22 points (4-of-6 from 3) and nine assists. Former Kings guard Buddy Hield netted 21 points and Malcom Brogdon went 7-of-13 from the field to contribute 20 points for Indiana, who won for only the second time in their last 10 games.
The Celtics were outscored 39-25 in the second quarter after the Pacers used a 15-5 run late in the first half and trailed 66-55 at the break. Indiana extended their lead to 19 in the third before the C's went on a 17-5 spurt of their own to get within seven (83-76) with 3:46 left in the period.
Down 92-82 to start the final frame, Boston once again cut the deficit to seven, but Hield scored five straight for the Pacers on their way to a 35-point fourth quarter and the victory.

"As professionals you don't know what's coming toward you every game or every other play, so you've got to adjust and we didn't," Robert Williams said during his postgame presser. "They came here to play, honestly."

The Celtics return to the TD Garden on Tuesday night to host the Atlanta Hawks (29-31). TNT will have the tip-off at 7:30 PM ET.