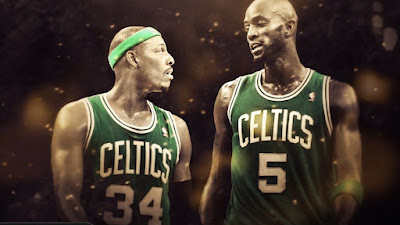 Two Celtics legends will share a stage next month, as Paul Pierce will be inducted into the Naismith Basketball Memorial Hall of Fame class of 2021.
ESPN's Marc Spears has reported that Kevin Garnett is set to present Pierce at the Basketball Hall of Fame enshrinement ceremony, which is scheduled for September 11 in Springfield, MA.
The two, who have been friends since the days of playing AAU together in Inglewood, CA, won an NBA championship together with the Celtics in 2008 along with Ray Allen and Rajon Rondo.
Pierce and Garnett helped bring the Celtics back to the Finals in 2010 but lost to Kobe Bryant and the rival Los Angeles Lakers before reaching the Eastern Conference Finals in 2012, which they fell to LeBron James and the Miami Heat -- in a pair of Game 7 defeats.
Still, after six seasons together in Boston, both were traded to the Brooklyn Nets in the summer of 2013 after Danny Ainge decided it was time to rebuild.

"I've said it a hundred times,'' Pierce said in an article written by ESPN's Jackie MacMullan back in 2018. "Kevin Garnett and I were meant to be together. It's just too bad it took us so long to make it happen.''

Pierce is the last of the Celtics new "Big 3" to get inducted into the Hall of Fame, as Garnett (class of 2020) and Allen (class of 2018) have already crossed that threshold.
Other former Celtics that will be in attendance is basketball icon Bill Russell, who will inducted into the Hall of Fame once again, but this time as a coach.
Russell is only the third person behind Lenny Wilkens and Tommy Heinsohn to be inducted into the Basketball Hall of Fame as both a player and a coach. The 11-time NBA champion became the first Black coach in North American professional sports when he took over as player-coach for the Celtics in 1966, winning two titles in that role. He would also go on to coach the Seattle Supersonics from 1973-77 and the Sacramento Kings during the 1987-88 season.
He was inducted as a player in 1975, but didn't accept his Hall of Fame enshrinement ring until 2019.
Meanwhile, Allen will also make an appearance at this year's ceremony as he and Pat Riley are to present former Heat teammate Chris Bosh as part of the Hall of Fame class of 2021. The two played back-to-back seasons together, winning a championship in 2013 -- after Allen left the Celtics as a free agent the summer prior.
This will be the first time that Pierce, Garnett and Allen are going to be in the same room together in at least seven years.
Joel Pavón
Follow @Joe1_CSP