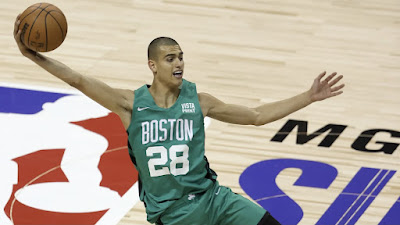 Yam Madar, the Celtics' 2020 second round pick, will remain overseas for the foreseeable future or at least through the 2021-22 season after signing a deal with Partizan NIS Belgrade of the Serbian League.
The club announced the signing of a three-year contract just one day following the conclusion of the Celtics in NBA Summer League, where Madar played three games before sitting out the final two with a groin injury.
The 6-foot-3 guard reportedly turned down a two-way contract with the Celtics after the team made the signing of Dennis Schroder official last week, adding the veteran to their backcourt depth.

According to @sport5il @OManhime, @Celtics summer league player Yam Madar will turn down a 2-way contract from the Celtics in favor of a multiyear deal in Partizan Belgrade, with Europe's most famous coach, Zeljko Obradovic. https://t.co/4ioIBmk72x


The Celtics still retain the rights to Madar and they could bring him back to next year's Summer League roster after having quite the debut in their opener, which was a down to the wire win over the Atlanta Hawks.
Madar averaged 4.7 points, 1.7 rebounds, 1.0 assists and 1.0 turnovers on 46.7% field goal with 0%  from three-point range -- and no free throw attempts in three games played.
Partizan will give Madar a chance to compete in the EuroCup after playing the last three seasons with Maccabi Tel Aviv of the Israeli League (2018-2021). Maccabi and Partizan came to an agreement on a reported buyout of $250,000, the same amount Boston would have needed to pay in order for Madar to be released from his Israeli contract.
For now the 20-year old Madar, who said he expected to play in the NBA this season, will look to improve on his 3-point shooting and playmaking against better competition under one of Europe's best head coaches in Zeljko Obradovic.
Joel Pavón
Follow @Joe1_CSP