Paul Pierce on Kevin Garnett: "He changed my career, my life" 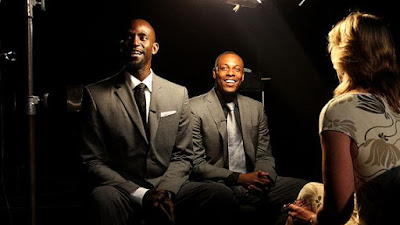 In the days following Paul Pierce's No. 34 being retired and raised to the TD Garden rafters, the question has been asked, who the next and last number to join Pierce thus completing the banner?

Pierce will tell you without hesitation, there's only one person that should have their number retired and his name is Kevin Garnett.


"Without a doubt, KG's number will be [the next one] retired in Boston," said Pierce. "It's going to happen."

To say that Paul Pierce and Kevin Garnett are just two former teammates that happen to be paired up together in Boston to help the other win their one and only championship would be an understatement. The friendship between the two not only became a part of their basketball journey, but it eventually led to them being linked forever.


"I've said it a hundred times,'' Pierce said in a recent article written by ESPN's Jackie MacMullan. "Kevin Garnett and I were meant to be together. It's just too bad it took us so long to make it happen.''

If you haven't heard the story on how Pierce and Garnett met, legend has it that the summer leading up to their senior year in high-school, Pierce's Inglewood AAU coach convinced Garnett, who hailed from South Carolina, to play with them for a weekend.

The article goes on to say, Garnett stayed over Paul's house while enjoying the likes of Ms. Pierce's baked chicken for a couple days, and later on Inglewood would win a tournament out in Las Vegas, which led to KG wanting to switch high-schools.


"I literally thought he was coming to my high school and we were going to win a state championship together,'' Pierce recalls.

For the rest of the summer, Pierce kept in contact with Garnett in hopes the two were destined to play and win together, until Pierce learned KG was heading to Farragut Academy in Chicago.


"I was a little upset,'' Pierce admits in the piece. "I had all these friends on speakerphone with him, and now he's not coming.''

It would be another decade in a half before the two friends would become teammates, but not before a near fight almost broke out when they played each other in Boston on December 15, 2003. According to Pierce, Garnett dunk on Tony Battie while screaming, leading Pierce to yell at his then teammate:

In classic Garnett fashion, he responded with "What did you say?"

Pierce took one step forward and said, "You heard me!''

Both were in the each other's faces, with players having to separate the two.


"We were both competitors,'' Pierce laughed, as he remembered that night. "Frustrated ones.''

Another memorable moment that the article details, that might have played a part in the now infamous: July 31, 2007 trade that brought Garnett to Boston, was a game at the Garden on March 7, 2007, between the Celtics and Timberwolves, who were both wrapping another losing season.

It was when Garnett was at the free throw line and Pierce, while getting ready to box out, looked at Celtics co-owner Wyc Grousbeck, who always sits along the baseline.


"If you're serious about winning a championship someday,'' Pierce yelled to his owner, "then you need to get that guy!"

"KG, man,'' Pierce continued in between free throws, "What's gonna happen? Either you are coming here, or I'm going to Minnesota!"

The Celtics would win that night, one of only 24 total victories during that 2006-07 season and two superstars headed into the offseason not sure of their futures.

It was not until later that summer, Pierce received a phone call from friend and former Celtics teammate Antoine Walker, who assisted Gary Payton's wedding, along with Garnett in Los Angeles.


''I think you might finally get your boy.'' Walker told Pierce. "KG was at the wedding, too, and was talking about finally moving on from Minnesota."

With no social media to worry about leaks of a possible trade in the works between Boston and Minnesota, the blockbuster deal was complete. The former 2004 NBA MVP was officially a Celtic


"When you are losing all the time,'' Pierce says, "you start saying, 'What's my motivation? To come back and lose again?' It felt like a waste.

"But then Kevin came and gave me a kick in the butt. He changed my career, my life.''

We all remember what happened nearly a year later, the Celtics became 2008 champs and though Pierce believed they could have won multiple rings had it not been for injury (KG in 2009, Perkins in 2010 and Shaq in 2011), he credits Garnett for taking his game to the next level.


"KG helped define my career,'' Pierce says. "If he doesn't come, we don't win a championship, and I never get to the level I always wanted to be.''

Today Pierce and Garnett live in the same neighborhood out in Los Angeles and while their careers didn't end the way they wanted or even together at the same time, they know they were lucky to finally win once they became teammates again all those years later.

We watched Pierce's No. 34 get raised to rafters this week, but there's still one empty spot right next to his and in an era where players now chase money and super teams, wouldn't it be fitting that two best friends, who remained loyal and won get to have their numbers hanging side-by-side forever?


"They go together. Those two guys are linked. That's how it is," said former 2008 teammate Brian Scalabrine. "Even the fact that there's one more spot on that banner, that spot is No. 5. He's the guy. They hang out [together in Los Angeles], they also hang out right next to each other on the banner. There's no argument out there that he does not belong on that banner. No one out there can make that argument."

It would make sense after nearly 10 years since Pierce and Garnet raised Celtics championship banner 17 at the Garden, No. 5 should be next on the retired list, but only time will tell.


Until then, to read the full Jackie MacMullan article about Pierce and Garnett, click here