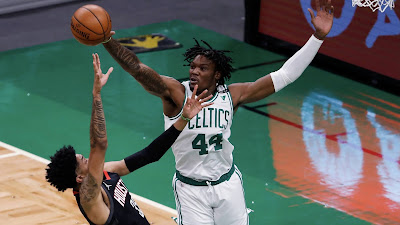 The Celtics formally announced the contract extension of center Robert Williams III Tuesday afternoon in an official press release.
The 23-year old signed a four-year deal, which will keep him in Boston through the 2025-26 season.

"Rob has worked hard to turn himself into a very impactful player, and his talent and selfless play give him an even higher upside to reach going forward," said Celtics president of basketball operations Brad Stevens via a team statement. "Rob has embraced being a Celtic from day one. He is a great teammate and is completely committed to getting better. We're excited that he will continue to do so here in Boston."

While Williams' extension was reportedly for $54 million, according to Jay King of The Athletic, the deal is only worth $48 million with roughly $6 million serving as incentives that won't count against the salary cap.
Per Brian Robb of MassLive, here's a full breakout of Williams' contract year-by year, starting with the 2022-23 season.
2022-23: $10.7 million
2023-24: $11.6 million
2024-25: $12.4 million
2025-26: $13.3 million
Total: $48 million in guaranteed money
The biggest incentive each year for Williams would be if he plays 69 games or more, which means an extra $446,000 per season. The Celtics big will also earn an additional bonus of over $200,000 if the team makes it to the Eastern Conference Semi-Finals and Conference Finals on top of hitting the games played incentive in any given season.
If Williams is selected to any All-Defensive first or second team over the duration of the deal, he will receive more bonuses. There is also no trade kicker attached to the contract and Williams wouldn't be eligible to be moved until January 29 at the earliest.
Williams' extension is considered a "poison pill" contract and it would be difficult to be included in any potential trade to match salary before July of next year.
In three seasons Williams has played in only 113 games so far, but he did see the floor in a career-best 52 contests (13 starts) during the 2020-21 campaign, putting up career highs in points (8.0), rebounds (6.9), assists (1.8 ), steals (0.8), blocks (1.8) and minutes (18.9). He was the No. 27 overall pick during the 2018 NBA Draft.
Joel Pavón
Follow @Joe1_CSP