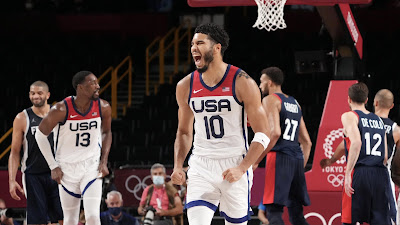 Team USA (5-1) is taking home their fourth straight Olympic gold medal in men's basketball, after defeating France (5-1) in a preliminary round rematch, 87-82 Saturday at Saitama Super Arena.
After four weeks of the U.S. Olympic Men's Basketball Team coming together for the first time as a roster, minus two players that had to leave and three that were playing in the NBA Finals, Team USA is leaving the Tokyo 2020 Olympics with a huge statement made to their naysayers.

"I hate to compare stuff because you know everything is its own moment," Kevin Durant said postgame, "but this is one of those special journeys that it's just hard to describe, because each and every one of us put in that work every single day, from the coaches, to the trainers, to the players. We all came in with that goal of, 'Let's finish this thing off. Let's build a family. Let's build this team. Let's grow this team every day.' And when you are part of a team that's evolving by the second, it's just amazing to see."

Durant finished with a game-high 29 points, including hitting two huge free throws with 8.8 seconds left to seal the win, the U.S. won it's fifth straight since losing to France in their first game to kick-off their Olympics quest. The Americans now have 16 gold medals won from the 19 Olympics in which they have participated.
For U.S. coach Gregg Popovich, one of only five coaches with at least five NBA championships, finally has the gold medal that was missing from his long resume of accomplishments. The current and longest tenured coach in American sports with 25 years of service (and counting) to the San Antonio Spurs, Popovich seemed relived about completing the three-plus year process with Team USA winning the gold.

"You know what sayonara means? That's how I'm feeling right now," Popovich joked during his postgame presser. "I agree with these guys. Every championship is special, and the group you're with is special. But I can be honest and say this is the most responsibility I've ever felt, because you're playing for so many people that are watching and for your country and other countries involved. The responsibility was awesome, and I felt it every day for several years now. I'm feeling pretty light now and looking forward to getting back to the hotel and having something."

All-Star forward Jayson Tatum scored 19 points and grabbed seven rebounds off the bench and becomes the first Celtic to win a gold medal since Larry Bird in the 1992 Barcelona Games. NBA champion Jrue Holiday and Damian Lillard each added 11 points respectively, as the U.S. avenged their only loss of the tournament to France from exactly two weeks ago.
Rudy Gobert and Evan Fournier led the French with 16 points a piece, while Nando De Colo chipped in 12 points and seven assists. France, who has never won a gold medal, received their third silver in 10 Olympic appearances -- also winning in 1948 and 2000.
While it was another slow start for the U.S. out of the gate, they quickly used a 16-6 run to close the first quarter with a 22-18 advantage. Despite falling behind by double-digits in the previous two games, Team USA had a 13 point lead in the second period before France cut it to five (44-39) at the break.
Once again the Americans caught fire from 3-point range in the third after a poor showing from behind the arc in the first half. Team USA led 71-57 with 1:20 left in the quarter following a Tatum dunk, but back-to-back 3s from Nicolas Batum and Timothe Luwawu-Caborrot cut France's deficit to single-digits again (71-63) heading into the final frame.
The U.S. never gave up a lead like they did in their previous meeting with France in the group stage where they simply went cold from the field. However France hung around the entire fourth quarter and even got within three with 10.2 second left to play.
Gobert fouled out after picking up his fifth on a play against Durant and the Nets superstar iced the win for Team USA by sinking both free throws, before Batum air balled a 3 in the final seconds.
The win gives Durant at age 32 his third straight Olympic gold medal, considering all he's been through since the 2016 Rio Games, especially with his Achilles injury and being only one of two returning players from that roster four years ago -- the other being Draymond Green -- Durant proved why he should be considered a leader.

"KD is not special because he's so talented," Popovich said. "The way he works on his game is more impressive, the relationships he builds with teammates, the respect he garners, the joy he has in playing. It's like osmosis, it goes into all the other players and allows you to develop a camaraderie and an enjoyment to be together. That sort of love of the game and love of people is what makes him more special than as a player."

Milwaukee Bucks guards Kris Middleton and Holiday become the first teammates since Michael Jordan and Scottie Pippen in 1992 to win an Olympic gold medal right after winning an NBA championship.
JaVale McGee, who was named to the U.S. roster after Bradley Beal and Kevin Love had to withdrawal prior to the start of the games in Tokyo, has made history. His mother, Pamela McGee, won a gold medal with the U.S. Woman's Basketball team at 1984 Los Angeles Games and they have become the first mother-and-son duo to win gold in any sport at the Olympics.
After being delayed a year due to the COVID-19 global pandemic, the Americans are taking home the gold medal at the Olympics. They overcame all the odds such as a roster that was rushed to be put together following a condensed NBA season that led to a lack of chemistry in the beginning, while also being without their family in Tokyo -- among other factors.
Congratulations to USA Basketball on another job well done, all things considered.
Joel Pavón
Follow @Joe1_CSP