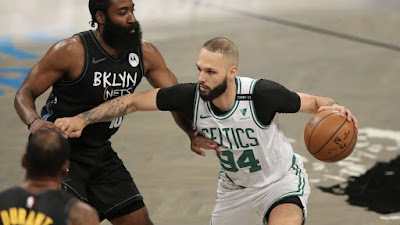 After a flurry of trades made by president of basketball operations Brad Stevens over the past two days, it seems one may have been an insurance policy for a certain pending free agent.
Per a report by Mark Murphy of the Boston Herald, the Celtics finalized trade for veteran guard Josh Richardson with the Dallas Mavericks, may have been a 'Plan B' in case the price for soon to be unrestricted free agent Evan Fournier became too high.

"According to a league source, negotiations between the Celtics and Evan Fournier are close to stalling, with the team unwilling to meet the valuable wing player's asking price of $80 million over four years.
"Though it's unclear what the Celtics are offering, 'it's not looking good,' said the source."

While Fournier is putting his value on display in Tokyo playing for France, especially in the surprising win over Team USA, Boston reportedly was seeking to negotiate with the 6-foot-7 guard closer to the $14-16 million range, according to John Hollinger of The Athletic.
After leading France to a 3-0 record in group play and scoring 28 points against Celtics teammate Jayson Tatum and Team USA, Murphy notes that that New York Knicks have shown interest in Fournier and the feeling is mutual.
The Knickerbockers are projected to have over $50 million in cap space when free agency opens August 2 at 6:00 PM EST.
On Saturday, the Celtics dealt newly acquired Moses Brown to the Mavs for the 6-foot-5 Richardson, who will fit into the remaining of the same TPE (Hayward sign and trade) that was used via trade that landed Fournier in Boston to begin with.
The Celtics also sent Tristan Thompson to the Sacramento Kings in a three-team trade which involved the Atlanta Hawks sending guard Kris Dunn and Bruno Fernando in return on Friday, but the former 2016 first-round draft pick could still be on the move.
All things considered, if the price to retain Fournier's services is too high, Richardson automatically becomes the back-up plan, as Stevens continues to re-tool this Celtics roster.
Stay tuned.
Joel Pavón
Follow @Joe1_CSP