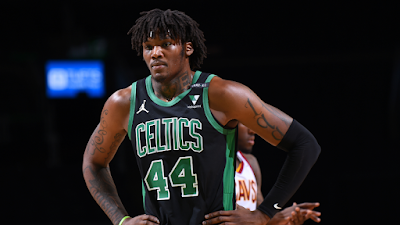 The Celtics and Robert Williams III have reportedly agreed to a four-year, $54 million contract extension, according to ESPN's Adrian Wojnarowski.
The 23-year old big man is coming off his best year as a pro in year three, as he earned the starting center spot while averaging 8.0 points, 6.9 rebounds, 1.8 assists and 1.8 blocks (tied for sixth in the NBA) in less than 20 minutes (18.9) per contest.

Boston Celtics center Robert Williams has agreed on a four-year, $54M contract extension, his agent @KB_radbury of @Rep1Sports tells ESPN. Williams’ deal puts his salary in top half of league’s centers despite only 13 career starts. pic.twitter.com/gUQHzLWcCJ

After playing just 32 and 29 games respectively in his first two seasons, Williams managed to stay on floor during the 2020-21 season by displaying more athleticism on both sides of the ball and cutting down on committing fouls -- while appearing in a career-high 52 games (13 starts).
Unfortunately, Williams did miss 20 games with an assortment of aliments included a turf-toe injury that kept him from making much of an impact during Boston's playoff series loss in the first round to the Brooklyn Nets following Game 1, where he finished with 11 points, nine rebounds and nine blocks -- a Celtics postseason record -- in less than 23 minutes of action. He would only play six minutes in Game 3, then was sidelined for Games 4 and 5.
The deal not only is an investment in the Celtics young center, but it also locks in Williams alongside the core of Jayson Tatum, Jaylen Brown and now Marcus Smart for the next few years as the future of the franchise.
While the risk of Williams' health presents itself as the big "if'" and the elephant in the room, the Celtics can still reap the benefits of a center who should continue to show more discipline on defense and growth on offense as there go-to-guy in the middle going forward.
Joel Pavón
Follow @Joe1_CSP