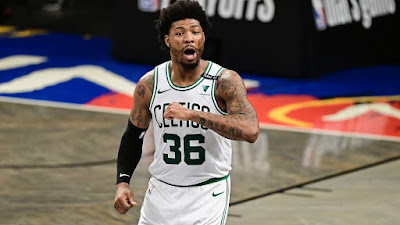 The Celtics and Marcus Smart have reportedly agreed to a four-year, $77 million extension, according to Shams Charania of The Athletic.
The extension, which includes a trade kicker and no options, will keep Smart under contract through the 2025-26 season.


Smart, the longest tenured Celtic, has helped the team make it to the playoffs in each of the seven years since being drafted sixth overall in the 2014 NBA Draft. Considered the C's unofficial captain, Smart has been a fan favorite for his leave it all-out on the floor style of play.
During the 2020-21 campaign, Smart averaged career highs in points (13.1), assists (5.7) and minutes played (32.9). Despite the increase in production across the board it also came with a dip in Smart's overall shooting, hitting just 39.8% overall and only 33% from 3-point range.
It was only 10 days ago that the Celtics reportedly offered Smart the same deal he has now agreed upon, which was close to the $80 million the veteran guard was reportedly seeking just prior to the team making an offer.
While the move backs up new Celtics coach Ime Udoka calling Smart a "foundational piece," it also shows trust in the guard from the team's new president of basketball operations Brad Stevens, who coached Smart for seven years.
Smart now joins teammate Jayson Tatum as the only Celtics players signed through 2025-26. Tatum has a player option in the last season of his rookie extension worth $37.1 million and Jaylen Brown is under contract through 2023-24.
The extension comes just days after the Celtics announced the signing of free agent guard Dennis Schroder, that could likely be paired up with Smart as a starter in the backcourt. It also means Boston seemingly has taken themselves out of the running to create max cap space for the summer of 2022.