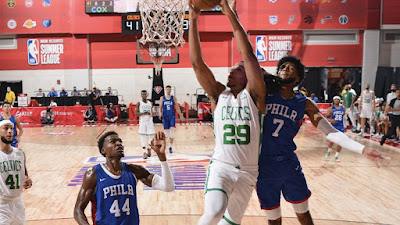 The Celtics cruised past the Philadelphia 76ers 100-80 Saturday night in Las Vegas, to conclude the Summer League regular season at 4-0.
Carsen Edwards took full advantage of Payton Pritchard (personal) and Yam Madar (groin) being out to finish with 16 points, seven assists and five rebounds to go along with two blocks and steals in the Celtics' season finale.

"Carsen made the right play every time," Summer League head coach Joe Mazzulla said in his postgame presser. "I told him after the game how proud I was of him doing that. He knew when to shoot it and when to get his teammates involved, and he made the right reads. It was awesome to watch and I'm really happy for him."

Zach Aususte led all scorers with 18 points, Aaron Nesmith and Romeo Langford each added 13 points respectively and Bruno Fernando -- who was celebrating his 23rd birthday -- chipped in nine points and 11 rebounds in the Celtics' fourth straight win.
In every game its been a different player has stepped up, as you can see the hunger and mentality of the team throughout their time in Vegas thus far.

"They're good players, really good players, and they are aligned, and they buy into what's important," Mazzulla explained. "I think all of them, being at different points in their careers, are hungry to achieve something, whether that's development, or everybody is looking for affirmation in something. I think these guys just want to know they are good players and they can play in the NBA."

Isaiah Joe scored 15 points to lead the 76ers, while Paul Reed chipped in 14 points and 11 rebounds as the the only two players to register double-digit scoring for Philadelphia (2-2).
Boston once again jumped out in front to begin the first quarter and the 76ers hung around the rest of the half, but Philly trailed 48-39 at the break.
The Celtics turned up the defense in the third period that resulted in easy transition buckets, while outscoring the Sixers 30-14 to take a commanding 78-53 lead heading into the final frame.
Essentially with the game out of reach, the Celtics hit the 100-point mark for the third straight time in four games on a K.J. Lawson made 3 with 37 seconds left to play.
After setting a record of 33 assists in their blowout win over the Magic Thursday night, Boston handed out 22 dimes against the 76ers to improve their team average of 25.5 assists per game.

The Celtics, who also recorded eight total steals and 12 blocks against the Sixers, are likely to play in the Summer League championship game Tuesday night that will tip-off at 9:00 PM EST on ESPN.
Joel Pavón
Follow @Joe1_CSP