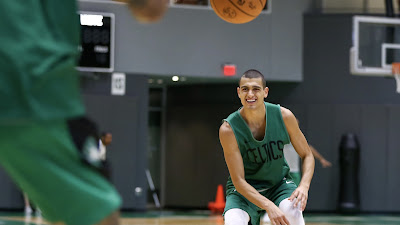 Celtics rookie guard Yam Madar doesn't plan to be stashed overseas for one more season.
The former 2020 second round draft pick has been in Boston getting ready for NBA Summer League. Madar, who is the reigning Most Improved Player of The Year in the Israeli Premier League, spoke to the local media following a practice at the Red Auerbach Center.

"It's a new challenge," Madar said to reporter. "I worked really hard, I prepared myself for this moment to come. I know it's going to be this year that I come, and I'm excited to get started."

Of course, Madar was asked to clarify if he's indeed planning to play in the NBA and for the Celtics this upcoming season.

"Yeah, I'm planning to come and play for the Celtics this coming up year," Madar responded.

While Madar wants to play for the Celtics, acquiring him won't be that easy as he lost his arbitration hearing to officially be signed already. In order for the 20-year old to join the Celtics roster it will have to be via a buyout to Madar's current club.
While the point guard depth chart is rather thin at the moment beyond Marcus Smart and Payton Pritchard, Madar may be the addition Celtics basketball of operations Brad Stevens has been looking for.
According to Madar, he has grown into a significantly better player over the past season in Israel.

"The season was great for me," he said. "I think I grew a lot in my ability. I improved a lot of things in the offensive and defensive side. I understand the game much more than I had in the past season. I just need to build it year by year, because when you’re here, you just want to go from the start."

One area that Madar improved in was his shooting last season, especially from 3-point range at 40.9% on 4.4 attempts and free throws -- hitting them at an 82.8% clip this past year with Tel-Aviv.
Madar, an avid Celtics fan growing up, says he wants to add muscle while he prepares during the offseason.

"You put that work in, and knowing that your goals are bigger than the place you're playing at, it's the day-to-day work," Madar said. "Being in the gym, putting that work in, at the end it pays off."